Scores of jellyfish have been washed up on the Thanet coastline as warmer weather accelerates the growth of algae and plankton which they feed on.

The jellyfish have been spotted along the coastline from Ramsgate to Minnis Bay. 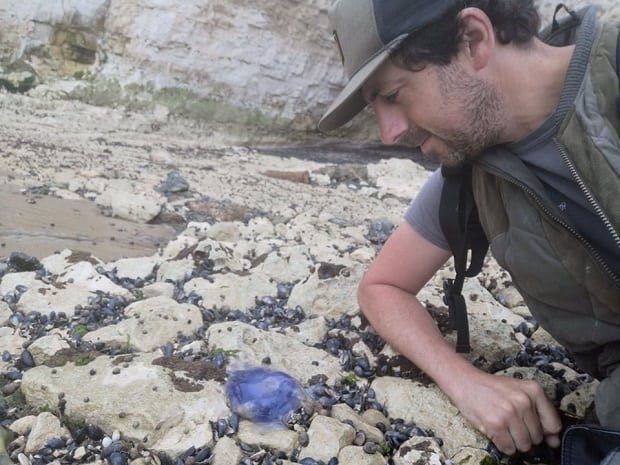 Nik Mitchell, from Thanet Wildlife Conservation, came across between 30 and 40 washed up at the Western Undercliff this morning (June 11).

He is warning beach-goers to be aware and not to try and move them back into the water. He also explains what jellyfish are (they are not fish), why they are “awesome” and gives some tips on how to deal with jellyfish stings.

Several species of jellyfish are occasionally spotted on the Thanet coast – although people are warned not to touch even stranded specimens as their sting can be painful.

Hundreds of blue and of white jellyfish have also been reported as washed up, and in the water, at Southend this week.

Very small and branched, looks a bit like a fluted wine glass. Nearly always attached to seaweed or rocks.

These are extremely common. Look for the four conspicuous blue circles on the body. Usually found as small specimens washed ashore, but can grow up to 30cms or more. Can give a mild sting but usually totally harmless

Easily recognised by the lines radiating from the centre of the body. Usually washed up on the shore broken up . Body can be a dinner plate width with tentacles a metre or more trailing behind. There are occasional seasonal swarms.  sting unwary swimmers.

Rare. Specimens found stranded are usually small, less than 10 cms across the body but they have been known to reach sizes of 60cms or more, They look very similar to a straggly brownish/yellow rug, hence the popular name, with the tentacles trailing many metres behind. Dangerous to swimmers as the sting can be extremely painful.

This is not a jellyfish, but a floating colony of organisms dependent on one another for survival. These do exist in UK waters. The sting is extremely painful for humans and can be fatal in rare circumstances.

If you get stung:

Most jellyfish stings are mild and don’t require treatment, or you can treat them yourself. However, dial 999 if there are severe symptoms, such as difficulty breathing or chest pain, or if a large or sensitive area of the body has been stung.

Someone stung by a jellyfish should be treated out of the water – Any remaining tentacles should be removed using tweezers or a clean stick (wear gloves if they’re available). Applying an ice pack to the affected area helps to reduce pain and inflammation.

Vinegar is no longer recommended for treating jellyfish stings, because it may make things worse, by activating unfired stinging cells. The use of other substances, such as alcohol and baking soda, should also be avoided. Ignore any advice you may have heard about urinating on the sting. It’s unlikely to help and may make the situation worse.

Use a razor blade, credit card or shell to remove any nematocysts (small poisonous sacs) that are stuck to the skin. It may help to apply a small amount of shaving cream to the affected area first.

Aftercare: Any pain and swelling can be treated with painkillers, such as paracetamol and ibuprofen. Portuguese man-of-war  stings can be treated in a similar way to jellyfish stings. After carefully removing any remaining tentacles from the skin, thoroughly wash the affected area with seawater (not fresh water).

Afterwards, soak the area in hot water to ease the pain. Pain from a Portuguese man-of-war sting usually lasts about 15-20 minutes. Seek immediate medical assistance if you experience severe, lasting pain, or if the affected area becomes infected.