Margate dad-of-six, grandad and great grandad Ron Shaw has written an epic tale of survival in a post-World War Three society – and had his own epic battle along the way with an optical stroke, personal losses, the arrival of the pandemic and he and his wife falling victim to covid.

Ron, who celebrates his 74th  birthday next week, has published the first two parts of trilogy Ring of Arrows and has now resumed writing part three.

Described by Ron as Thanet’s version of Game of Thrones, landmarks in the tale include Arlington House, Monkton Nature Reserve, Margate main sands and the Viking Ship overlooking Pegwell Bay. 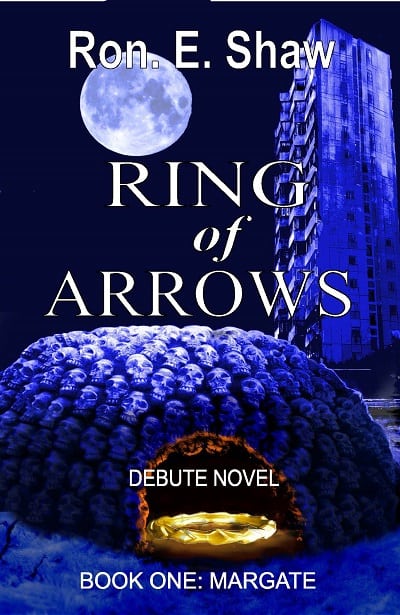 Ron says the tale of survival follows a wedding ring after a dream on the Camino de Santiago reveals how God is a supercomputer.

The dream inadvertently causes World War Three where viral weapons kill 99.9% of the world’s population in a matter of weeks.

As the few survivors make for the countryside, a young doctor is walking through Margate when he finds a baby crying beside its dead mother. He picks the baby up and takes it with him.

Mains electricity has already come to an end, and within decades petrol and bullets run out.

As children are born, a second Iron Age emerges with ploughs and weapons beaten from the abundance of scrap metal.

Superstition and witches replace religion and priests. An old witch lives in the Monkton Chalk Pit, granting visions to anyone who dares enter her igloo of skulls.

New laws are created that brand thieves and banish them as outlaws. As outlaw numbers grow they form their own communities on the mainland side of the Stour.

The baby has grown to give birth to two half brothers: one through love, and the other through violent rape.

One of the brothers becomes the leader of Thanet while the other is a sadistic thug scheming against his brother.

When war is declared against the outlaws, Arlington House becomes the HQ of the Thanetanian Army who repair and re-float the old Viking ship at Pegwell.

Ron said: “It’s a brutal tale filled with intrigue and consequences. In one chapter, Margate beach is filled with an angry lynch mod demanding justice, while in another, children are building sandcastles as an odd love triangle develops with the leader of Thanet and his wife both in love with the same slave.

“Men and Women fight with equal bloodlust with athletic young girls galloping into battle screaming like banshees, and a group of rebellious drunks bring humour as they form an elite force based on the SAS.

“Think of it as Thanet’s answer to Game of Thrones.”

Ron, who was born in Ramsgate, wrote his first illustrated children’s books some 25 years ago but says they didn’t ‘get anywhere.

He returned to writing, but this time with his tale of adult fiction, after retiring.

Ron, who started work in the coal mines aged 15 and then joined the Army at 18 serving in Borneo and Hong Kong, said: “My ambition to become a writer began with illustrated children’s stories called the Dustbin Men that appeared for a while in a magazine called Cartoon World. They are now ebooks on Amazon Kindle.”

Ron and wife Christina settled in Margate, raising their six children in Millmead before buying a flat in Arlington House.

Ron’s epic was prompted by a dream but the writing journey was not smooth,

He said: “In 2013, I was the man in the story who had a strange conversation on the Camino de Santiago. I’m not a religious man, but I’m convinced I was talking to the strange entity we refer to as God. To suit the story, I changed some of the words spoken in that dream, it had nothing to do with a pandemic, but it’s just strange how thing just happen.

“I began writing Ring of Arrows in the spring of 2018. Two weeks into it, I had an optical stroke that took away part of my vision.

“My driving licence was revoked so I could no longer work as a volunteer for Kent Wildlife Trust, and my life changed forever.

“Reading was a challenge with half of the page I was reading swirling with a beautiful psychedelic light show, and writing became an experiment of moving my head to read the line I was typing.

“But I persisted, and by Christmas Part One was completed and Part Two was underway. 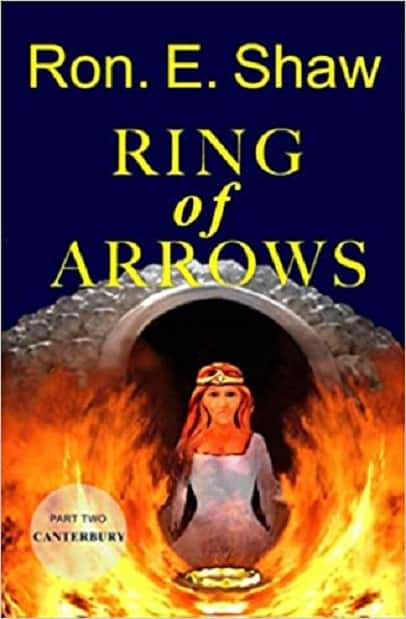 “I was halfway through Part Three when Covid arrived, and I realised how the story revealed the worst scenario of not taking a pandemic seriously. So, rather than waste time approaching agents, I decided to self-publish on Amazon Kindle.

“A few weeks after publishing Part Two, just before Christmas 2020, Covid took my brother and knocked the wind out of me.

“A month or so later two of my neighbours died, my wife and I caught the virus, and I recall staying awake all night wondering at what point I should call an ambulance for my wife who was struggling to breathe.

“We both survived but, for a while, I lost all enthusiasm for writing a story based on the aftermath of a pandemic. But times passes, and I am slowly finding the strength to continue, after all, it’s a story of survival.”

Part one is titled Margate, Part Two Canterbury and Part Three is titled Deja vu. And, as well as writing the books, Ron even spent lockdown creating a model of the Igloo of Skulls that his Monkton Nature Reserve witch lives in so he could use it for his front cover to part one!

Ron, who has worked everywhere from Dungeness B to being a town warden and in the 70s won the pools and blew the cash on fun, is now writing his life story – Little Ronnie.

He said: “Little Ronnie is an epic story of an ordinary kid of the post war baby boom, from school to retirement. The word count is approaching half a million.

“Since leaving the Army, I have never been able to keep a job for than two years. This gave me an interesting life with experiences that are essential for writing. I’ve been rich, poor, wild, but always dedicated to my family.”

Find Ring of Arrows parts one and two on Amazon, available in Kindle or paperback