Broadstairs 1st XI notched-up their second win of the season in a low-scoring affair away to Ashford Town that featured an exceptional performance from Chris Kidd who finished with 7 wickets for just 2 runs from 6.3 overs.

Broadstairs batted first having lost the toss and the opening partnership of Alex Hogben and Nathan Fox looked on-track to establish another valuable 1st wicket partnership until Hogben was dismissed in the 8th over for 17. This prompted a succession of  low-scoring dismissal with the exception of Jamie Dewell who offered some hope for the visitors with a quick-fire 35. When the final wicket fell, Broadstairs had posted just 123 and knew they would need to make some early breakthroughs to stand any chance of a positive outcome for from the game. 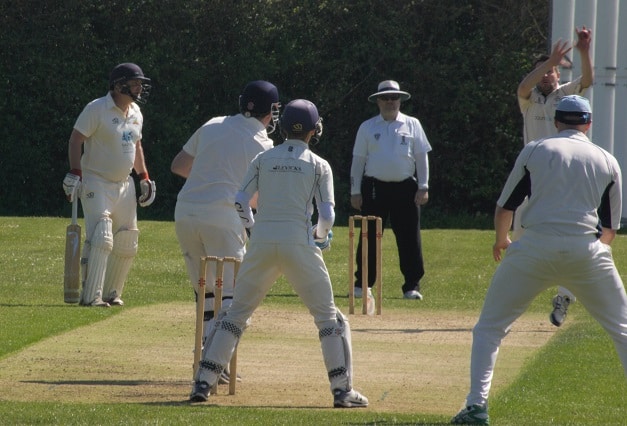 The bowling combination of Bradley Ellison (2-15) and Harry Carter (1-20) rose to the challenge, aided by some excellent catching from Hogben and Matt Hardy. By the time Chris Kidd began his sensational spell, the Ashford innings was already stuttering at 39-3.

During the subsequent 12 overs, the hosts would add just 5 more to their total as Kidd systematically dismantled the Ashford batting line-up. His seven wickets included two distinct Kidd doubles, one being a caught and bowled and the other involving a sharp catch at second slip by teenager George. The win places Broadstairs in 2nd spot in Division 2 although they will be aware that they will need to bat better in future matches to mount  serious case for promotion.

Next week they host fellow promotion contenders Dartford in a match that promises to be keenly contested and will serve useful barometer for Broadstairs’ chances of progressing to Division 1.