This will enable us to have the food to trap any stray cats and dogs without using our own money for trap food.

Most importantly it will also help support those who in these uncertain times are suffering hardship and struggling with providing food for their beloved furry family members.

Thank you also Carley Muslun and Sue Tazey from Tesco.

After spending 20 years giving words of advice on sea safety, John was finally lost for words when he received his long service award from the RNLI.

Having first sailed at the age of 14, and owning his own yacht from the age of 20 and with 60 years experience on the water, there isn’t much that John Homer doesn’t know about boats.

About 25 years ago he joined the Bexleyheath branch of the RNLI as part of the volunteer fundraising team. Having moved to Medway, where he berths his own yacht, a Countess 37 Ketch, he became involved with Sheerness Lifeboat Station providing Sea Checks, a free service provided by the RNLI, checking on the seaworthiness of yachts, advising on engine maintenance, sea safety and providing life jacket services.

Asked whether he ever had to call the RNLI whilst sailing he said, “ I bought my yacht after having a full survey done on her, and the weekend after was heading from Medway to St Katherine’s Docks in London when my alternator seized on the boat by the Thames Barrier, leaving me with no power. As required I radioed up, explaining the situation and a nearby friend was able to provide a tow for me. Shortly after Tower RNLI station radioed up asking if I was in need of any assistance, followed shortly after by Gravesend Lifeboat station. Both offers were politely declined explaining that I was under tow and quite safe.

That night the Coxswain of Sheerness phoned me up asking what was the trouble with the alternator, word had reached my station! I was very glad that I didn’t have to get any of the crew to come out to rescue me, I would never have lived it down!”

John moved to Broadstairs seven years ago and  is now part of the volunteer Thanet RNLI Community Team, spending his weekends patrolling our beaches, giving advise to residents and visitors alike. He’s always amazed how people from as close as London have no idea at all about the tides, and are completely unaware that they can be cut off by the water and place themselves in danger. He explained: “It’s not a hobby, it’s important!”

Well done John, thank you for everything you do, and hope you have many more years ahead of you.

Without people like John and the generosity of the general public the RNLI would no longer be able to continue its work of Saving Lives at Sea as we are solely funded by public donations.

Yellow wellies will be used for walking, running and jumping across Kent this month as the RNLI holds its annual Mayday appeal to raise much-needed funds for the charity that saves lives at sea.

In preparation for a busy summer of staycations, with millions of people expected to head to the coast, the RNLI is putting out its own Mayday call by asking supporters to take part in the Mayday Mile to raise funds.

Whether you choose to swim it, run it, cycle it or simply walk it, the Mayday Mile challenges people to cover one mile in anyway they like between Sunday 1 May and Monday 31 May to support the charity.

On route the duo, who have already raised almost £700,  stopped off at Kingsgate, which had an RNLI lifeboat station from 1862 to 1897 and Broadstairs where the lifeboat station was on the harbour from 1851 to 1912.

“We have been going for long socially distanced walks during the lockdown and have been talking about the best way to help the RNLI as it has been a difficult year,” said Karen. “So we decided to carry on walking and raise money for the RNLI at the same time. We reached our target in a few days so now have raised it!”

To find out more about Karen and Sarah’s Mayday challenge click here: https://themaydaymile.rnli.org/fundraising/mayday-4-station-walk

With restrictions on travel in 2020, RNLI crews were busier than ever across the south east, with 13% more lifeboat launches than in 2019 and a 45% increase in people aided by the volunteer crews. With restrictions ongoing, it looks likely that this summer will be at least as busy on our beaches and our lifeguards and volunteer crews need your support to save every one.

If you have any fun, challenging, original ideas for participating in a Mayday Mile to support the RNLI, please sign up at https://themaydaymile.rnli.org/

Calling children’s and youth group leaders, and school students currently in year 13 in Birchington or Acol!

This local charity may be able to help you with the finances of your group or help you settle into higher education or apprenticeships with small cash grants.

Completed applications need to be received by October 15.

For an application form please write to or telephone:

Kent Community Foundation established a new fund earlier this year as part of its 20th anniversary celebrations, to provide core funding to one charitable organisation from each of the county’s districts. The thirteen groups whose applications were successful received £12,000 in April, will receive a second grant of £9,600 in April 2022 and a third of £6,000 in April 2023, towards their core costs, including utilities, rent, and staffing costs.

Josephine McCartney, Chief Executive, Kent Community Foundation, said: “This year Kent Community Foundation is celebrating twenty years as a grant-maker. As part of our celebrations, we are delighted to be able to award £360,000 over the next three years, from our 20th Anniversary Fund to thirteen local organisations for their running costs. The diverse mix of charities receiving this financial support really reflects the variety of charities supporting communities throughout the county.

“We know from our own research that core funding is where charities and community groups across the county really need help and we are delighted to be able to assist these groups. The 20th Anniversary Fund was created with funding from the John Swire 1989 Charitable Trust, and we would like to thank them for their continued support.”

The recipient from Thanet was East Kent Education Business Partnership Ltd, which aims to enrich the curriculum, actively engage employers in the development of their future workforce and equip young people with a better understanding of personal skills and their future choices. www.ebpkent.co.uk

Anne McNulty, CEO of East Kent Education Business Partnership Ltd, said: “We are simply delighted to be a recipient of this wonderful award, we aim to help as many young people as possible over the next three years and are truly honoured by this opportunity.”

To find out more about Kent Community Foundation visit www.kentcf.org.uk

Save Our NHS in Kent 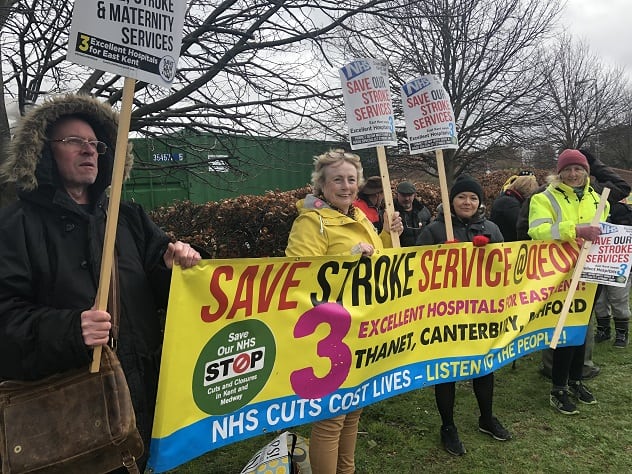 Seventeen candidates in the recent Kent County Council elections signed a pledge to fight the planned closure of accident and emergency, stroke and maternity care in east Kent NHS hospitals.

In the run up to the elections, Save Our NHS In Kent (SONIK) asked candidates to sign the pledge and to “accept nothing less than three excellent hospitals at Margate, Canterbury and Ashford.”

Candidates were also asked to refuse any “party whip, diktat or ruling” which asked them to accept anything less than the pledge and to lobby the Secretary of State for Health and Social Care to stop the closures.

A spokesperson said: “We are extremely pleased these candidates signed the pledge and hope, whether elected or not, they will follow through on their commitment. NHS bosses are trying to cut costs by getting us to accept emergency facilities which are too far from where we live and will will inevitably  result in more people dying. We must fight for our hospitals.”

Candidates from the Labour, Green, Liberal Democrat and Woman Equalities Parties all signed the pledge.

For a full list of the candidates who signed the SONIK pledge, go to the link:
http://saveournhskent.org.uk/?p=6540 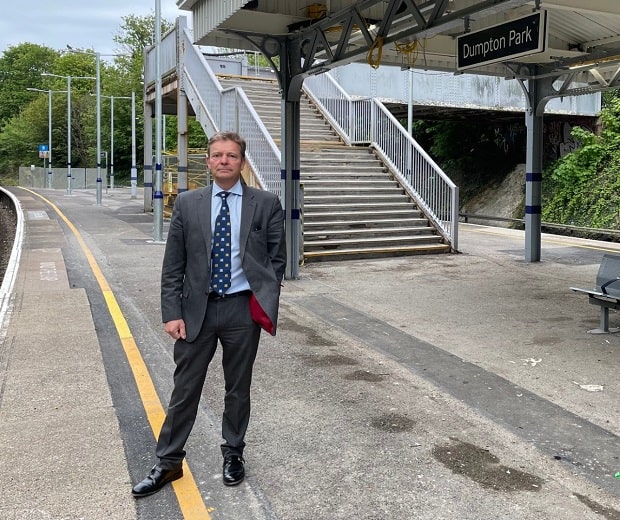 Craig Mackinlay MP has joined the charity, Guide Dogs, in calling for warning tactile to be installed on the platforms at Dumpton Park and Sandwich train stations in his South Thanet constituency by 2026.

Warning tactile is a vital orientation and safety measure that warns blind and partially sighted people when they are close to the platform edge.

The move comes after a visually impaired passenger had a fatal accident in February 2020 after falling from the platform edge at a station in South East England and was struck by an approaching train. The Rail Accident Investigation Branch (RAIB) investigation found that: “The platform edge was not fitted with tactile surface markings intended to assist visually impaired people. This is a possible causal factor”.

Craig is lobbying Network Rail, the Rail Delivery Group and train operating companies such as Southeastern Trains to take steps to reduce the risk to visually impaired people using station platforms where tactile surfaces have not yet been installed.

He said: “There are approximately 56,200 people living with sight loss in the county of Kent and they deserve to know they will be safe on our train stations’ platforms.

“However, the latest data from Network Rails shows that a third of station platforms in Great Britain do not have warning tactile which is an essential safety feature for blind and partially sighted people when they are close to the platform edge.

“That’s why I’m joining with the blind charity, Guide Dogs, to call for warning tactile to be installed on those platforms that do not already benefit from it, including Dumpton Park station and Sandwich station in my South Thanet constituency.”