At just 10 weeks old baby Maxwell Webb is fighting for his life in a London hospital after a hernia operation inspection discovered he was suffering ecoli sepsis, meningitis and hydrocephalus – a build up of fluid on the brain.

It is Maxwell’s second battle for life after the neonatal and intensive care teams at William Harvey Hospital in Ashford saved both his life and that of his mum Cherelle Webb.

Maxwell’s dad, former sports and celebrity coach driver Aaron Gammon, says the ‘phenomenal’ team sprung into action when he became worried about Cherelle Webb who was 24 weeks and 5 days into a ‘high risk’ pregnancy.

On March 5 Cherelle, who has three older children, underwent a scan at the Ashford hospital and staff confirmed foetal distress. Following further examination her waters broke and Maxwell was born at 11.04pm, weighing in at just 1.5lbs.

Aaron, who is a full-time dad to his two boys aged 5 and 10, says Maxwell has been cared for at William Harvey since birth but was transferred to St Thomas Hospital in London for the hernia op on April 5.

He said: “We transferred to London but then Maxwell contracted ecoli sepsis which then caused meningitis. Now we have found out that he will need major brain surgery due to a condition called hydrocephalus.

“He is currently 1500grams in weight and in the past five weeks has fought ecoli sepsis and meningitis.

“He had a lumbar puncture performed which showed growth of meningitis, a serious infection of the blood. This in turned attacked his brain causing a blockage of fluid on his brain which was seen on cranial ultrasound images, with repeat scans done to measure growth.”

Aaron, who was due to take a first exam to join the police force but has now had to put that on hold, said the effect of fluid on Maxwell’s brain means his head circumference has been swelling by nearly half a centimetre a day.

The little one is also on pure oxygen because of severe lung disease, meaning he just isn’t strong enough to be transferred to Kings College Hospital to have a shunt inserted to drain the fluid away from his brain. 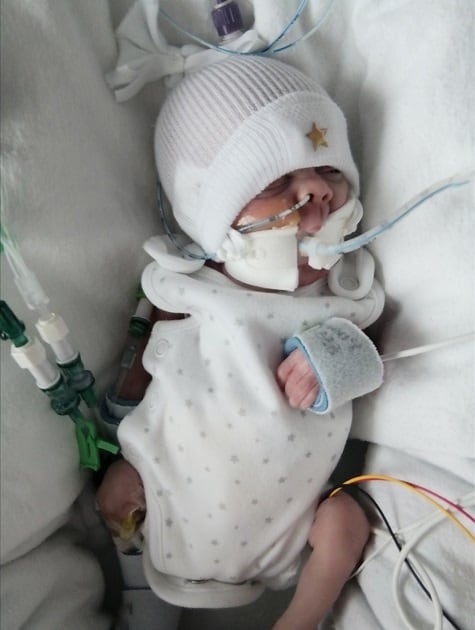 Aaron said: “Kings College were contacted and it was requested an MRI (scan) be done on Maxwell to see the extent of the fluid as his head circumference just kept increasing.

“As Maxwell is on the highest pressure his ventilation can give plus 100 percent oxygen at the time, he was deemed unstable so they had to take a window of opportunity when his oxygen reduced down to around 80 percent  to try for the MRI.”

A successful MRI scan was taken and neuro surgeons agreed a ‘tap’ was necessary – meaning a small drain was put through the soft spot on Maxwell’s head and 20ml of fluid was removed.

But Maxwell still needs the shunt but is too small and too weak to undergo the operation at the moment and, at one point, was given a prediction of just six to 12 hours to live.

Aaron and Cherelle, from Ramsgate, are currently being helped by the Ronald McDonald House charity which provides parents with little ones in the hospital with accommodation nearby.

Due to the continuing covid situation the pair have been taking it in turns to be with Maxwell and so have only been seeing each other in the mornings and evening. The couple are able to visit Maxwell together for two hours on a Saturday and Sunday.

Aaron said: “The Ronald McDonald House has been a godsend. The staff here make this a home from home and without them and the support of our family this would have been so much more difficult.” 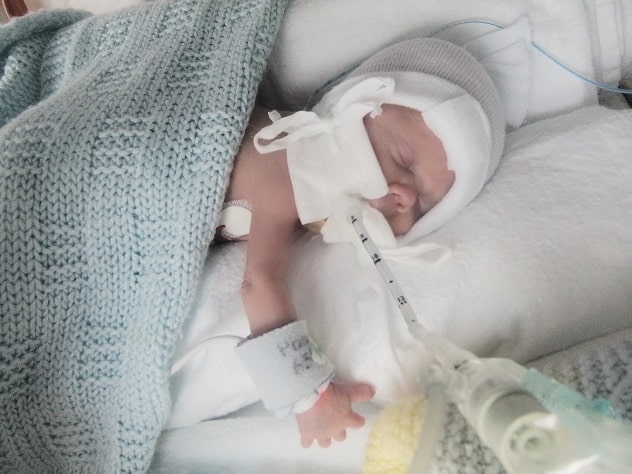 The pair have also been in touch with charity Shine which supports and informs families living with spina bifida and hydrocephalus.

But Aaron says the experience has been a shock and the couple are trying to get to grips with what the condition means.

He said: “I had never heard of hydrocephalus and we would like to reach out to anyone who has experience of this condition so we can get a better understanding and knowledge from parents or carers about hydrocephalus and the journey.

“We know every child is different but we just want to understand what is happening and, especially, to hear anything positive where their child has survived. This is obviously what we are hoping for.”

Aaron and Cherelle would like to hear from parents and carers who have been in a similar position with a premature baby needing surgery and those with experience of hydrocephalus.

Aaron can be reached by email at aarongammon07@gmail.com

‘Hydrocephalus’ describes conditions in which there is a build up of excess cerebrospinal fluid (CSF) in the chambers of the brain, it compresses the surrounding tissue and raises the pressure inside the skull.

Among the causes is meningitis where the inflammation and debris from the infection block the drainage pathways resulting in the condition.

The usual treatment is to insert a shunt – a tube-like device which controls the pressure by draining excess CSF, preventing the condition from worsening.

Find help and information from Shine charity at https://www.shinecharity.org.uk/