A man has defaced a statue in Margate which is modelled on a war veteran who served in Basra during the 2003 Iraq invasion.

Artist Michael Rakowitz’s ‘April Is The Cruellest Month’ depicts Iraq War veteran Daniel Taylor, pointing an accusatory finger at Westminster. Rakowitz worked with Veterans For Peace on the project, and the statue includes objects donated by Taylor and other veterans, as well as by local artists and residents.

Yesterday (Friday) the plinth of Rakowitz’s statue was defaced with red paint. Kent Police were called at around 7pm, after a report that a man was writing graffiti on the artwork.

Officers ordered the man to clean off his vandalism although staining on the statue base remains.

A Kent Police spokesperson said: “Kent Police was called at around 7pm on Friday 14 May 2021 regarding a report that a man was writing graffiti on a memorial in Canterbury Road, Margate.

“A patrol attended the scene where officers spoke to a local man in his 40s. They requested he clean off the graffiti and the suspect was then interviewed under caution. Enquiries into the incident are continuing.”

‘April Is The Cruellest Month’ has been installed as part of  England’s Creative Coast: Waterfronts, a series of seven outdoor art commissions made in response to the Essex, Kent and East Sussex coastlines. 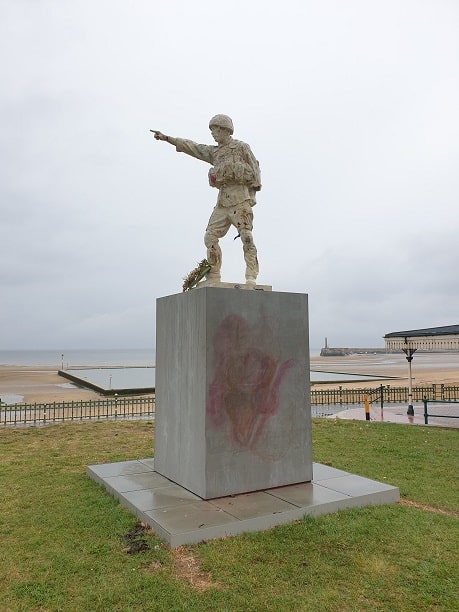 The statue sits next to the TS Eliot shelter, and echoes the older statue which is a memorial to the crew of the Margate lifeboat ‘A Friend To All Nations’. That statue, by Frederick T. Callcott, was installed in 1899.

For more information about the statue and the Waterfronts programme, visit www.englandscreativecoast.com

Video with thanks to Jamie Jones