A frontline NHS worker and her partner have been left devastated after builders destroyed their first property, leaving them homeless.

But their joy turned into a nightmare after the downstairs renovation project caused the property to collapse resulting in more than £50,000 worth of damage and  leaving them penniless.

Sherrie says the drama started in September last year just three months after they completed. She said: “We wanted to update the ground floor first as that’s what we could initially afford so budgeted around £20k. This included knocking the wall down between the kitchen and dining room and installing a supporting steel beam. We did our research and the company we chose had five star reviews and insurance in place. They also made us feel confident.”

But soon a series of mistakes began to take place including ripping up new flooring, poor workmanship by subcontractors and a stopcock being boarded up. Their personal items were damaged and doors to the property left unlocked.

Sadly the worst was to come as the steel beam was installed incorrectly causing the first floor to bow; huge cracks began to appear and the walls started to come away – none of the downstairs doors would shut properly. Sherrie explained: “They (builders)  said that we should get a structural engineer at our own expense if we wanted to check it was ok. They had already boarded up the ceiling and said Building Control had signed it off which they hadn’t.”

The engineer confirmed their worst fears saying it was unsafe and the walls would need to be completely rebuilt to refit the steel. Quotes to fix the damage ranged from £50k to an eye-watering £100k, leaving the 24-year-old devastated.

Sherrie said: “We bought a bigger home as we wanted to start a family. It took us three years to save for a deposit. All our savings have gone. We have tried to remortgage, personal loans, credit cards – we’re selling our car to raise money so we can move back in and even applied to DIY SOS!.”

The company, who cannot be named due to legal reasons, eventually admitted liability but their PI insurance did not pay out due to incorrect information on their policy.

The couple next tried their own AXA Homebuyers insurance which they purchased with enhanced legal cover only to be turned down as the reason for the collapse was due to ‘poor workmanship.’

They are challenging the decision with the ombudsman but in the meantime have had to fork out up to £750 extra a month on rental costs plus the extra building work to ensure their home is safe.

Sherrie said: We moved into NHS accommodation the day before Christmas Eve but couldn’t stay as the hospital needed it for extra staff drafted in due to the pandemic. We later found an AirBnB but will need to leave when it reopens to the holiday makers.” 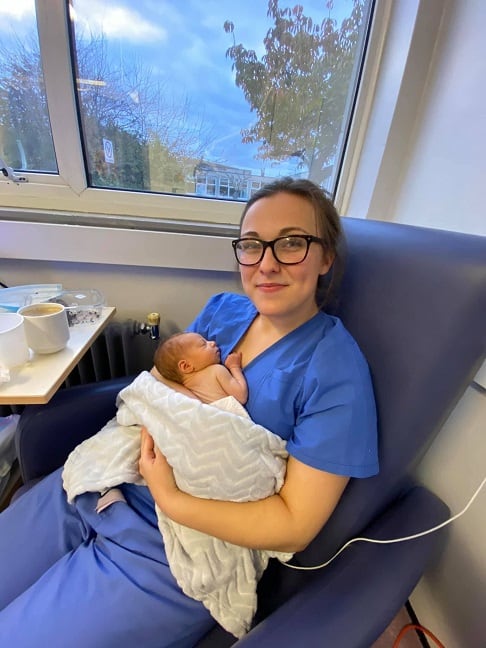 Sherrie has been working at QEQM Hospital delivering babies throughout the pandemic and has recently taken on extra shifts to help with the costs, which has taken its toll emotionally and physically.

Moved by their plight Sherrie’s sister Violet set up a Gofundme page in order to raise £10k – movingly some donors read their story on social media and remember her delivering their babies.

David Griggs who donated  £60 wrote: “Sherrie helped deliver our daughter nearly two years ago and then looked after my wife when she had to go into surgery. You were so lovely and really helped keep her calm, couldn’t of asked for more.”

George’s friends have also undertaken sponsored chest waxes to raise money for the couple. They now have new builders who are working tirelessly to make their home safe again.

To donate to the couple visit https://gofund.me/8c1a2f80