Updated plans for the development of 153 homes at the Westwood Lodge site in Poorhole Lane will be discussed by Thanet council’s planning committee next week.

The application for approval of access, appearance, landscaping, layout and scale of the development has been called in to committee by Green Party councillor Mike Garner who wants to raise issues of biodiversity, affordable housing and conditions laid down by the Planning Inspector.

The development was rejected by Thanet council in August 2015, citing the impact on the green wedge and lack of planning obligations. The application was subsequently approved on appeal by the Planning Inspectorate in February 2017.

The Planning Inspectorate decision overturning Thanet council’s case said it was weakened by a lack of a 5 year housing supply plan and “as the woodland visible along the northern and eastern site boundaries would be largely retained its distinctive landscape qualities would not be prejudiced.”

Former developer applicant Places For People Homes Ltd pulled out of the scheme last year. During the second half of 2020 Rooksmead Residential Ltd agreed terms with L&G Modular Homes on a revised set of proposals.

L&G Modular Homes have made a series of amendments including moving new builds further away from the existing buildings and retaining more of the trees onsite. 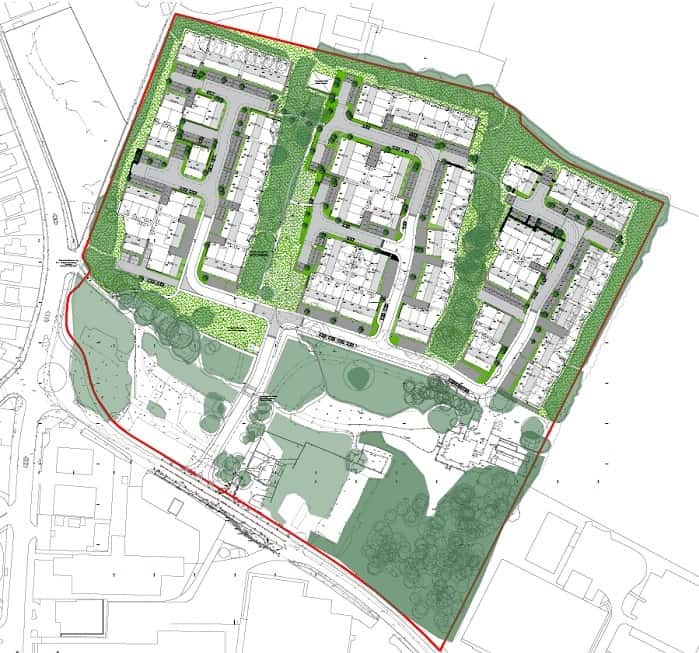 The main changes are:

No formal boundary is proposed between the new development and Westwood Lodge. This will remain as existing, with the boundary will be formed by existing trees, in order to protect the setting of the current building.

The listed entrance gates will be retained and opened up to pedestrian access along the carriage drive.

In a document to the planning committee Thanet’s biodiversity and horticulture officer says amended plans have resulted in an extra 2.89ha of woodland being retained, wildlife corridors, wildflower areas, hedgehog highways, a pond and swift and bat boxes.

At least 31 species of breeding birds recorded on site – including amber and red listed species. A Barn owl recorded foraging within the site.  Trees with low/moderate potential to be used by roosting bats and a brown long-eared bat roost was confirmed in a tree which will be retained.

The biodiversity officer says: “I believe the land management proposals if enacted as visioned could be an exemplary example for flora and fauna connectivity and people’s enjoyment.”

However concerns have been raised with 34 letters submitted in regards to the updated proposals raising issues including increased traffic and pollution. The Broadstairs society has also lodged an objection to the plan based on issues including the loss of trees and the lack of medical facilities to serve residents.

Kent County Council’s response on biodiversity was that the management plan, and inclusion of the habitat features, should be in place as soon as possible and monitored throughout the scheme.

Kent Police has asked for several conditions to make the scheme ‘safe.’

Last year the Thanet Trees demonstrated, dressed as zombies, against tree clearance at the site. The site was thought to be a former medieval plague burial pit but a heritage study carried out as part of the application says this could not be confirmed.

The scheme, which will include 30% affordable housing, will be mainly in the northern area of the 8.2 hectare site within land previous classed as countryside and Green Wedge.

Planning officers recommend the application is approved when councillors discuss it on May 19.