Pegwell Bay is eerily serene as the seascape stretches out into the estuary, the water still like a millpond.  On an overcast morning with the faint sound of birdsong in the distance I join Tony on a beachcombing exercise keen to learn more about the coastline.

Tony has explored the beaches along Thanet’s shores for more than 50 years and never tires of discovering fresh finds brought in by the sea while increasing his already vast knowledge.

From whale bones, shipwrecks, tropical woods and World War II debris it is the historian in Tony that keeps his curiosity for discovering and researching pieces alive.

“I started looking for things on the beach aged around seven when walking along with my dad. I know Margate very well but see over there” he says pointing to Sandwich Bay in the near distance. “Nobody knows what’s underneath. It’s untouched,” he says. 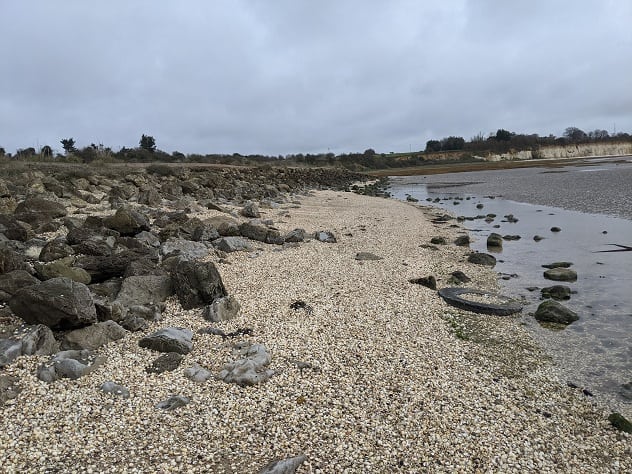 In the days of information overload, it’s a sobering thought.  But, conversely it is social media that has provided an invaluable platform from which to share information and attract a whole new audience.

Thanet and Sandwich Coastal Finds was set up by Tony five years ago and has since amassed 6,000 members. “It’s been really great and I have been surprised at how many others share such knowledge and passion for this coastline- it’s also good for kids who can share their finds here”, he says.

The bay today resembles a mollusc graveyard- the sound of thousands of shells crunch beneath my feet – the result of nature’s winter cull. Whelks and smaller iridescent carcasses bury the pebbles below.

The crumbling cliffs adjacent  prove a rich hunting ground for fossils but it is more recent debris that is first collected as we soon pick up one of the infamous ‘pertutz slides’…The ubiquitous plastic pollutants are thought to be  the result of a container spillage.

I wonder if some treasure hunters may be perturbed at their secret spots being revealed. “Oh definitely, I have come under some criticism for revealing some but it’s for all to share”, he tells me before striding over to a nondescript corner of the beach to prove the point. “This is  ‘amber corner’ “ he says before quickly spotting the orange hue of a tiny stone peeping out from the seemingly millions of shells. 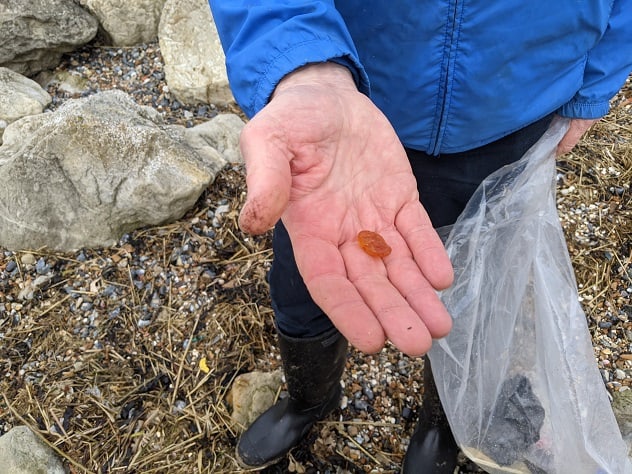 My very own piece of fossilised tree resin is dropped into my hand as my eyes turn metal detectors to scour the beach. Tony instinctively picks up pieces of sea coal and driftwood that may emanate from wrecks. “If it’s tropical wood it’s more likely to come from marine construction,” he informs me.

Contributing to local museums and documenting finds has been the  . Is there anything he finds particularly interesting? “It depends on the day” he says but I find shipwrecks of particular interest. It’s the historical side of it all. I have done a lot of research into Thanet’s wartime history with my finds and given items to Ramsgate Tunnels.

Tony’s pieces are often given to museums with paraphernalia also donated to local beach artists who use bits of wood and amber from artwork to jewellery making.

He tells a story of a marine engineer kayaking down the river and spotting a shape in the water. “He would have been able to know it was something significant” …. and it was –  a Tudor wreck lay beneath. Such is Tony’s knowledge of the seascape he was even able to correct the location of the wreck when pointed out on a TV report.

Recently he has been instrumental in assisting with an environmental hazard caused by pontoons breaking free at Sandwich Bay – the polystyrene floats underneath smashed into pieces and drifted into Ramsgate’s Western Undercliff. Volunteers helped to clear the area.

While the polystyrene was of huge concern Tony says the amount of plastic washed up at Pegwell over recent years has been arguably as problematic and has his rubbish bag at the ready.

“The last few years have been very bad for plastic pollution and rubbish. It isn’t that bad today but it’s been terrible.” As if to confirm his thoughts we randomly bump into Thanet Coastal Project officer, Tony Childs who is on route to ask for a donation of litter picking equipment from Southern Water.

Recent relics of our plastic past and present are far more prevalent in today’s beachcombing finds than pirate treasure, you can be sure though, if any does wash ashore, Tony will be the one to find it.

It is a  designated a Site of Scientific Interest (SSSI) and is one of the most important places for migrating birds.

This complex mosaic of habitats, including Kent’s only ancient dune pasture, hosts many rare plants and animals. Migrating birds stop for the breeding season here and species such as Nightingale can be heard singing their loud and melodious song, and cuckoos can be heard from the treetops signalling their territories, as well as the many warbler species – all creating a wall of birdsong.

In Summer, Ringed Plover will return to Sandwich Bay to nest on the shingle beach. Butterflies flit around the wildflowers and dune land flora, such as the lizard orchids and sea holly.

The Autumn sees the influx of the waders and waterfowl, feeding on the saltmarsh, recuperating from their long migration journeys ready for the winter. The seals can be seen in fantastic numbers in the Winter – they can be viewed from the end of Stonelees after walking through Pegwell Bay Country Park. You might even be lucky enough to catch the odd Waxwing in the winter that come to feed on the berries.