A new book charting the early development of Cliftonville as a seaside resort for affluent Victorians is being published this month.

The New Town On The Cliffs – The Story of Cliftonville, has been written by local author Nick Evans and includes more than 150 nostalgic illustrations, many of them postcards.

It shows how Cliftonville came into being during the 1860s, catering mainly for wealthy people who wanted to enjoy seaside holidays in some of the grandest hotels found anywhere along the south coast of England.  All, of course, without having to rub shoulders with the unwashed hordes staying just a mile down the road in Margate! 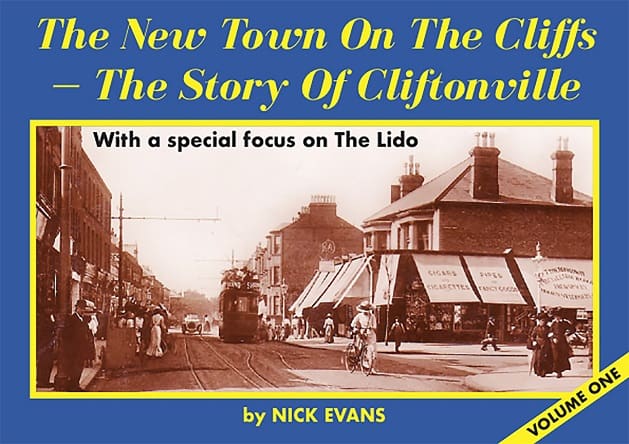 The 128 page book covers the period from 1865 until the start of the Second World War. Nick is now working on a second volume picking up Cliftonville’s history from 1945 to the present day which is expected to be published later this year.

Volume One recounts the story of  how an apprentice chemist, working in Northdown Road’s branch of Boots, was inspired to change careers, later becoming a criminal gangbuster heading up Scotland Yard’s operations to collar, among others, the Kray Twins and the Great Train Robbers.

There is a special focus on Cliftonville’s famous pleasure centre, the Lido, which recalls its glory days when visitors could spend summer days enjoying a swim in its open air pool, catch a theatre show or simply relax in one of several bars or a deckchair on the sun deck listening to organ music played by Tony Savage.

The fun on the foreshore theme continues with a chapter tracing the story of Sunbeam Photography, whose headquarters was in Sweyn Road, and the growth of its beach photography. On a busy summer’s day, its cameramen would be busy snapping thousands of pictures of beachgoers at resorts around the whole of Thanet.

Northdown Road’s shops before the Second World War are included along with hotels and guest houses of the era.  The town was an early developer of beauty contests in Britain, holding some of the first events in 1930 and a section depicts a few of the many parades held in Cliftonville over the years.

Nick said: “When I first embarked on this project, little did I know there was so much material to be found about Cliftonville. The only way to do the subject any justice was to write two books about the place.

“One thing I want to get across to people is how grand Cliftonville once was, evidenced today by some of the architecture still found around the town. Perhaps some people might feel inspired to help the community groups already working hard to make the town a better place.

“I’m sure the book will bring back happy memories for many residents and visitors to the town. I’ve been very fortunate to have been given access to some superb collections of Cliftonville pictures. Many of them are now more than 100 years old, and these form a substantial part of this first volume.”

It’s entirely fitting that long-established Cliftonville family run business, Lovelys Gallery in Northdown Road, will be the main stockist of Nick’s new books as it celebrates its 130th anniversary throughout 2021.

The New Town On The Cliffs – The Story of Cliftonville runs to 128 pages and costs £12. Copies can be pre-ordered via Lovelys website (where post and packing is extra) https://www.lovelysartsupplies.co.uk/the-new-town-on-the-cliffs-the-story-of-cliftonville-by-nick-evans.html or from the shop at 248 Northdown Road.  Copies can be ordered through any bookshop (post and packing will be added to online orders).

Available from May 7. Nick will also hold a book signing session at Lovelys on Saturday 15 May between 2pm and 4.30pm.