Spending 100 days in intensive care is a milestone no one wants to reach, but staff at East Kent Hospitals did all they could to make the anniversary a positive one for patient Alan Finch, from Ramsgate.

The critical care team at the Queen Elizabeth The Queen Mother Hospital in Margate arranged for his partner Claire Wickham to visit with his dog Coco, and wheeled his bed down to the memorial gardens so they could have a cuddle.

Alan, 49, was admitted to hospital on January 19 and taken to intensive care the following day so he could be put on a ventilator. It meant he was placed into an induced coma – and he didn’t wake up for two months.

He developed sepsis and pneumonia and his loved ones were called in twice to say goodbye after staff feared he would not survive.

Although Alan, who works as a carer, is now conscious and able to communicate, he still needs the ventilator to breath and requires intensive rehabilitation to help him recover the ability to swallow, speak and even move.

Claire said: “It has been unbelievable. It is like it is happening to someone else; it almost felt like a dream.

“It’s been the most awful time and words can’t describe how it feels. I would feel guilty if I laughed at something because then I would remember what he is going through. I wear one of his t-shirts every day so I feel close to him.

“But the staff have been absolutely fantastic, and just can’t do enough for him.

“It is a huge effort to get him outside – it takes about eight people, including nurses, a doctor, physiotherapists and porters, but it means he can feel the fresh air and the sun on his skin and it really gives him a boost.” 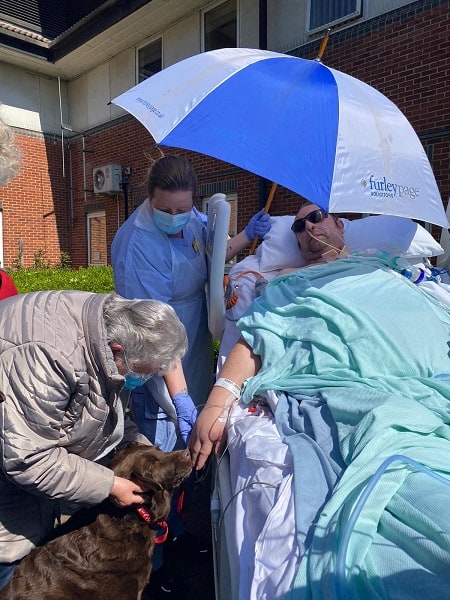 Staff are working on weaning Alan off the ventilator, as well as building up his strength, and Claire is now able to visit for an hour each day after restrictions were eased.

She said: “Being able to see him after such a long time has helped both of us mentally. It was his birthday at the start of April and that was so special to see him. Everything else feels insignificant compared to that.

“He still has the tracheostomy tube in but I can understand most of what he says. I’m so proud of him and his determination to get better.

“When I first saw him he couldn’t even hold my hand but now he can give it a really good squeeze and it feels amazing.”

Retail worker Claire has drawn strength from high-profile cases of long-term Covid patients, including TV and radio presenter Kate Garraway’s husband Derek Draper, who has just returned home after a year in hospital.

She said: “I do have a lot of guilt. I had Covid in January too but it just felt like I had a cold.

“Alan was almost finished with his self-isolation and was due to go back to work but he suddenly went downhill.

“I don’t know why I was fine and he has been so ill. He is the most kind and caring person you can meet, and he would do anything for anyone. It’s not fair that this has happened to him.”

Claire, who has epilepsy, has moved back in with her parents for support, and praised her family and friends for their support.

She said: “No one knows when he will be able to come home but they are doing everything they can and he is so determined to get better.

“I can’t thank the staff enough for their kindness – they always go the extra mile and never mind explaining everything to me, no matter how many times I call.

“They are all willing him to get better so he can come home.”