Campaigners have ‘occupied’ the site of a Sycamore tree that is due to be felled to make way for development in Margate Old Town.

Yesterday (April 26) Thanet council issued a decision of ‘no objection’ to notice for the felling of the mature tree in Duke Street. Permission to fell the tree was originally given in 2018 as part of an approval for a planning application to develop the site.

The notification of works this month was submitted by Duns Developments, based in Luton, for removal of the tree to clear the site ahead of building a four-storey property with five flats and a commercial unit.

The site was then sold at auction and permission subsequently granted for the flats development. 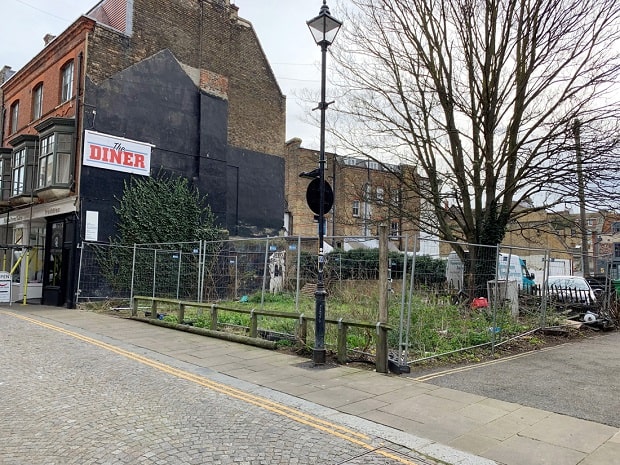 Members of the Thanet Trees and Mature Trees Matter facebook groups had mounted a campaign to save the tree.

Campaigners of new group Save The Duke Street Sycamore say they will pursue legal action and have accused Thanet council of ‘reneging’ over the community garden plan. Last week members sent a ‘notice of liability’ to Thanet council outlining the intention to seek a legal route.

Campaigner Dosh Archer said: “We are members of the local community who have come together to form a group named Save The Duke.

“We have set up a protest camp on a piece of land in Duke Street Margate in order to protect a mature sycamore tree – the Duke Street Sycamore, from being felled by Thanet District Council.

“We are also here to reclaim a community garden which should have been created on this site. The Duke Street Sycamore forms part of the skyline when seen from the harbour of  Margate, and is now under a death sentence passed by Thanet District Council. 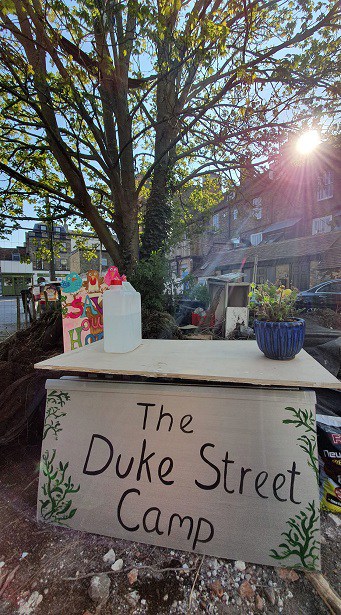 “It is one of the last remaining trees in Old Town Margate and is an essential haven for wildlife and pollinators. It cools the air in summer, provides shade and produces over 100kg of oxygen per year. This tree is an essential part of the natural flood defences and generally improves wellbeing for all.

“Now Thanet District Council have given the decision to fell the tree, despite over 70 objections, some of which refer to relevant laws which exist to protect trees such as the Duke. A block of flats which is not in keeping with the conservation area will take the place of this grand tree.

“In 2011 Thanet council announced the community garden on the site as part of the Turner Contemporary regeneration project. Instead, the land was sold at auction and the tree was ignored throughout this whole process.

“The community garden would have formed part of the Conservation Area, and would have provided a tranquil sanctuary close to the busy seafront.”

Protestors say they have questions over the legality of the permission and whether adequate ecology research was carried out. They also say the felling will be damaging to wildlife and goes against the Climate Emergency motion passed by the council in 2019.

Campaigner Abrey McKenzie said: “On April 17, observers recorded blackbird, chaffinch, blue tit, dunnock, goldfinch, house sparrow and woodpigeon in the tree. That’s a lot of birdsong which will be wiped out if Duke is cut down!

“It is nesting season and that could affect the situation dramatically. People are observing the tree on a continuous basis.”

Dosh added: “Save The Duke demand immediate and permanent protection for this healthy beautiful tree and an immediate investigation into the planning process which led to abandonment of the community garden. 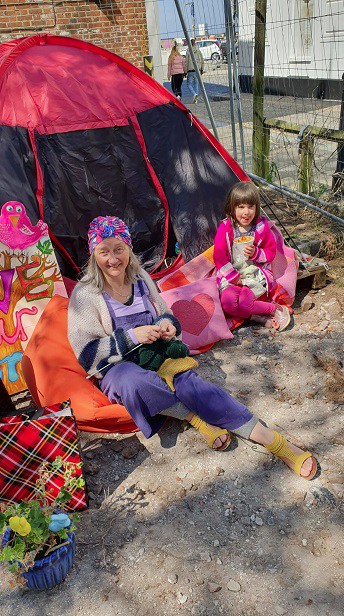 “We demand that the funds allocated for the garden are accounted for and put towards the purpose for which they were intended.

“Please join or visit the camp. Visit our page to find out how you can help and get involved. We are doing this for all the people of Margate and for the future of our children.”

Thanet council says the notice of liability is not valid and the planning permission, including the tree felling, pre-dates its climate emergency declaration.

A council spokesperson said: “Consent to approve the felling of the sycamore tree in Duke Street, Margate was granted by the Planning Committee in June 2018, prior to the Climate Emergency declaration.

“At the time, greater weight was given to using the site, which is in a Conservation Area, in a positive way and the recent notice to the council of intention to fell the tree took this previous permission and full planning analysis into consideration.

“The ‘notice of liability’ which has been raised has no legal grounds and is not a valid route to challenge this decision.”

Thanet council says that whilst the decision from 2018, before the Climate Emergency was declared, will mean the loss of the tree, the authority will be working hard to ensure that many more trees are planted across the district.

The council adds that as part of the new tree strategy it will also be reviewing its planning policies to ensure that they are effective and to place more value on trees on development sites.

The spokesperson added: “The council is currently developing a district-wide tree strategy to plan where trees can be added and what species would be suitable in each specific area. Our Local Plan also includes a biodiversity net gain policy which has to be considered when determining all planning applications.”

The council has previously advised the applicant that the tree cannot be felled during the bird nesting season and that it is an offence to remove, damage or destroy the nest of any wild bird while that nest is in use or being built. 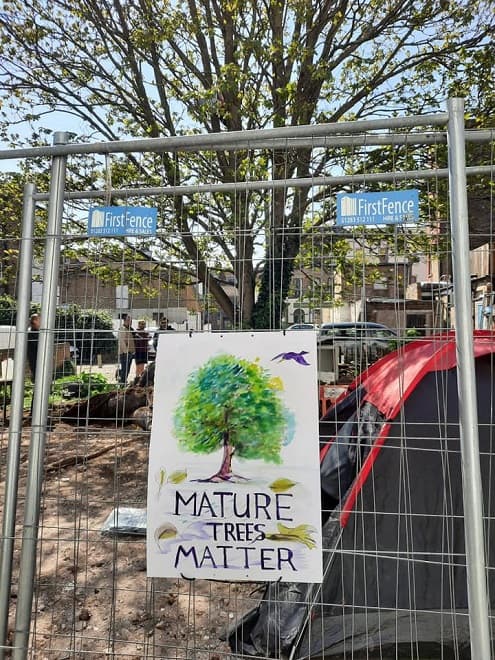 Find the Save The Duke page here

A petition to save the tree can be found here