Recycling rates have fallen across the isle, bucking the national trend even as authorities seek to improve facilities.

Government figures released last month show that Thanet households recycled 34.8% of refuse in 2019/20 – down from 36% in 2018/19 and the worst rate in Kent. Neighbouring Dover, which has a similar demographic, revealed a higher rate of 47.1%.

Resident Tricia Austen has warned that more must be done to reduce landfill, especially in light of the district council’s declaration of a Climate Emergency.

Addressing last month’s full meeting of Thanet District Council Ms Austen, who is a member of Ramsgate Waste Forum, told members: “Thanet’s recycling rate is poor with many without doorstep collection and public facilities are extremely limited… how do we plan to improve our recycling rates and facilities?”

Steve Albon, the council’s cabinet member for operational services, responded with a number of new council proposals designed to tackle the problem.

This includes placing new 1,100 litre bins for bottles and cans at the isle’s Blue Flag and Seaside Award recognised beaches.

He said: “We will promote this with clear messaging on what can and can’t be recycled.

“Recycling is everybody’s responsibility. One of the major issues with the public sites, for example in car parks, is contamination with non-recyclable waste which often means the whole bin goes to landfill.”

However, residents have been quick to point out there is currently nowhere to recycle plastics. A bottle bank at Dalby Square, which is maintained by a private contractor, regularly gets blocked with broken glass.

Currently 78% of isle households have a kerbside or doorstep collection.

Cllr Albon told the meeting there is an upcoming trial to introduce recycling to council-owned high rise flats later this year. 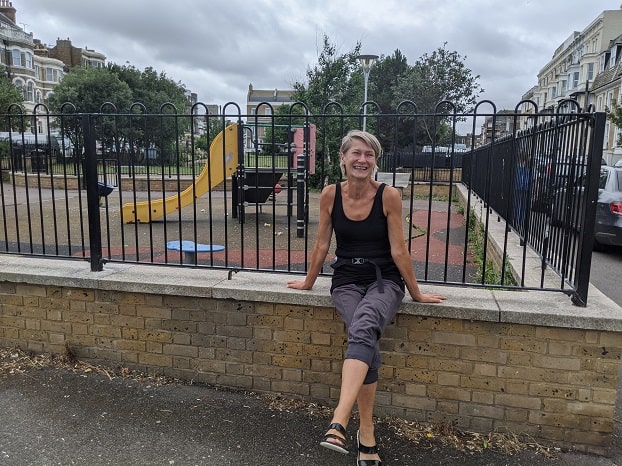 Parts of Cliftonville West have yet to opt in to a recycling scheme and the use of communal bins in some roads is a contentious issue.

Since the shared Paladin bins were removed from the top end of Athelstan Road, fly tipping has remained but the situation is gradually improving with implementation and improvement to signage, CCTV and services for residents.

Clare Stephens (pictured) of Dalby Square Area Residents Association (DSARA) says having communal bins on their street means people from other areas dump their waste there. She is fully supportive of their removal.

She said: “Of course someone on Ethelbert Crescent doesn’t want a seagull bag in their front yard and they prefer to walk around the corner, but the true impact of those bin areas on those who live right near them cannot be underestimated.

“They’re utterly vile and are misused continually. In the summer it is like living next to a rubbish tip.”

An audit of the square carried out by DSARA revealed many properties had room for collections and that local residents were not responsible for their misuse.

Ms Stephens said: “Speaking for all on Dalby Square, 99% use the bins respectfully, not on the floor etc and are perfectly able to recycle if they were given a leaflet. I would like to see a smaller area for bins gated off and a code given to residents for access.”

The issue of the bins being misused and resulting litter has also been raised numerous times by Athelstan Road Tenants and residents Association and the Friends of Cliftonville Coastline group.

Thanet ward councillors say they have worked hard to address myriad problems surrounding recycling and waste collection and are working with A Better Cliftonville (ABC) to restore the Waste Forum committee.

At a recent meeting with officers they discussed using landlord licensing powers to tackle properties that are not presenting waste correctly and revealed a multi task force project is proposed for Athelstan and Ethelbert Roads, which will include three engagement days.

Ward councillors have also put forward further requests to widen recycling to as many residents as possible, provide a leaflet giving details on where recycling facilities are situated and how to arrange a bulk collection from TDC.

Ramsgate and the Villages