Today (April 11) is World Parkinson’s Day. Parkinson’s is a progressive neurological condition. This means that it causes problems in the brain and gets worse over time.

To mark World Parkinson’s Day Ramsgate care worker Mark Bailey share his experience since being diagnosed with the condition in 2019:

When Ramsgate care and support worker Mark Bailey was diagnosed with Parkinson’s in May 2019 he wondered how it would affect his life, his family and his career with Caremark Thanet, who he had been working for just over a year.

Two years prior, stepdad-of-five Mark noticed a tremor in his left hand and sometimes left leg. He went to his doctor who thought it was due to an old sport injury and said to monitor it.

But, as the months went by, the tremors were happening more often, so Mark went back to the doctor and this time saw a locum.

She watched Mark take a walk and noticed his movement was not as it should be. Mark was sent to see a neurologist, who in turn arranged for some scans.

The grandad-of-two had suspected the worse and began investigating Parkinson’s online.  Some of the content he found was very informative, other details were inaccurate often misleading.

Then Mark, now 56, came across Parkinson’s UK website and the symptoms described mirrored what he was showing,.

After the tests were carried out, Mark had to wait a few months for the results but sadly his suspicions were true.

He said: “So now here I was with my official diagnosis, it was time to tell friends and family. We had a variety of responses, some calm and wanting to know more, some  really upset and worried that the end was near.”
Explaining and separating the facts from the fiction due to his research helped ease the fears and worries of his loved ones. 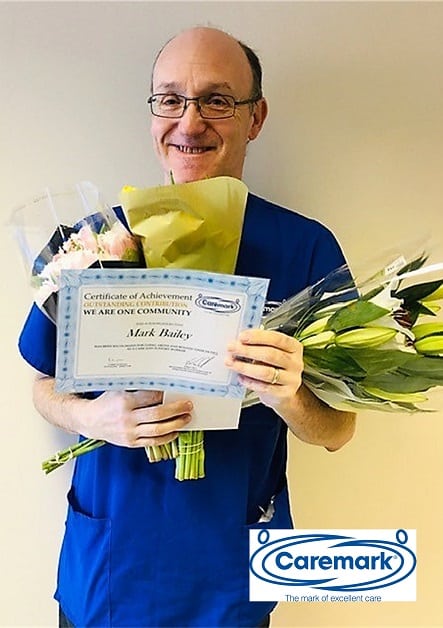 Mark then had to broach the subject with his employer Caremark Thanet.

He said: “I hadn’t worked for them for very long and was unsure about the response I would get, but I’m glad to say that it was excellent.”

Mark was able to have a full and open conversation with his line manager who was very supportive and listened during their regular meetings. The company is one of  the four businesses in Kent to have Disability Confident Leader status.

Mark added: “Over the next few months as I saw a specialist, my Parkinson’s nurse, more information came out as to what to expect, and it became clear that my capabilities as a carer would not be hindered.”

Despite the diagnosis, Mark remained upbeat and started to think ‘how can I turn this into something that can be a positive for me and others.’

He still has off days when he gets down, but is thankful about having an employer, family and friends that support him.

The work to help others

Mark is determined to help other sufferers and their families and also carers who care for customers with the disease.  Caremark Thanet has backed him and agreed for Mark to provide training on the complexities of Parkinson’s as an illness and to dispel the myths he witnessed during his research. This has now been incorporated into Caremark Thanet’s intense training programme.

Mark’s knowledge and expertise and real-life insights have been extended to customers, offering a range of exercises to aid their movement and improving their lives.

Mark hopes that once current restrictions are relaxed, he can get back to training and advising others.

He said: “My Parkinson’s nurse Lizzie is a great help and together we hope to get out and talk to care homes and hospital staff about this disease.”

Several colleges and a university are also  interested in Mark providing a talk about caring for people with Parkinson’s and living with the condition himself.

Since his diagnosis, Mark has become an active volunteer with Parkinson’s UK and has been involved in setting up an online group to help raise funds for research and raise awareness.  The group talks to researchers and doctors at the meetings as part of the ongoing support network and is developing  use of social media.

Currently, the group gets together virtually but Mark is looking forward to face-to-face meetings where sufferers of Parkinson’s can chat and support each other.

He said: “I also have a few plans in mind for 2022, I am planning to either do a walk to London Parkinson’s HQ, or maybe a 24-hour bike ride on a fitness bike, so watch this space.

The group offers friendship and support locally to people with Parkinson’s, their families and carers.

It has been running in Margate for nearly 30 years and provides an opportunity to meet, talk or just listen to other members with Parkinson’s in a warm friendly environment.

The group has singing sessions as part of some of the social meetings with instruments to popular music.

This helps with many of Parkinson’s symptoms associated with speech and swallowing. There are also visits from a Tai Chi instructor and a ‘Mindfulness’ group.

There is also a qualified exercise instructor who holds a seated exercise session, this is optional to join. This makes sure that members keep their muscle flexibility and mobility.

For information and advice on Parkinson’s, or for emotional support, call the Parkinson’s UK helpline on 0808 800 0303