A Dunkirk Little Ship starts the next chapter of its journey when it becomes the latest vessel under the guardianship of Captain Colin Carr.

Colin has spent the last 23 years running the Sandwich River Bus with passengers being able to step aboard for a trip out to see the seals or a journey to Richborough.

But Dover council has put the service out to tender with the expiring of Colin’s licence at the end of this month and Colin decided to take the plunge for a new adventure.

The Ferry Nymph is currently undergoing maintenance in Chertsey and is alongside another Little Ship, the Sundowner, which left Ramsgate in July last year.

On May 29,1940, Ferry Nymph and her sister ship Southern Queen were carrying passengers across the entrance of Poole Harbour when a telephone message was received from the Admiralty ordering both ships to Dover. There Ferry Nymph was taken over by Lt-Cmdr. Gerrard RN, re-fuelled and despatched to Dunkirk. She is known to have taken 72 on one trip and 90 on another across the Channel to Ramsgate.

In 1985 she joined the Little Ships fleet on their 50th Anniversary return to Dunkirk in 1940 and in 1994 Ferry Nymph sank in rough weather off Holehaven but was saved by members of the Dunkirk Little Ships Association and once more restored.

Colin says he was scrolling through for sale items online when he spotted Ferry Nymph. 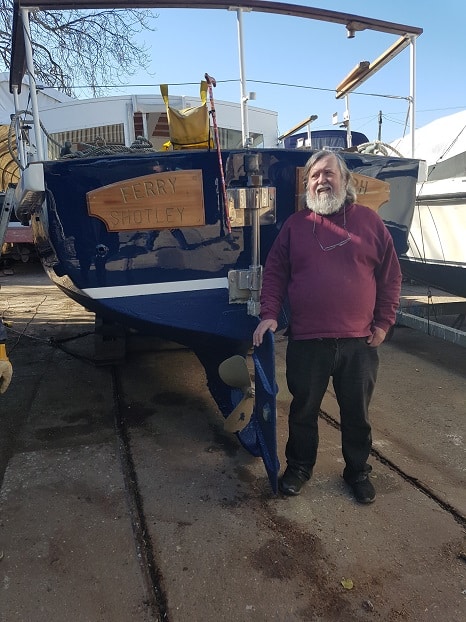 The 64-year-old said: “I showed my other half Liz and said ‘we could do this’ and she got very excited so we bought her.

“She should be launched on Monday coming for a couple of trials on the Thames and we are waiting for permission to take her under the Hammersmith Bridge on March 28.”

Ferry Nymph is destined for service as Colin’s Riverbus running from the Dog and Duck pub at Plucks Gutter and will still run trips to see the seals and to Richborough amphitheatre as well as being turned into an unusual, historic AirBnB. As trips will take longer than those from Sandwich, Colin and Liz are also planning a refreshments offering.

Former Sandwich Harbour Master Colin said: “The Dog and Duck  encouraged us to move there and we are over the moon.

“All being well we hope to start running from mid-April when the pub reopens.”

The ownership of the Ferry Nymph brings full circle a piece of family history as Colin’s grandad Tom was one of the fishermen who took part in the rescue of Allied soldiers from Dunkirk beach during World War Two.

Ferry Nymph will be joined in service by vessel The Heron which Colin will use for shorter trips up and down the River Stour.

History with thanks to Dunkirk Little Ships Association