From calling a barn dance and being abducted by militia in Russia to decades as a long serving PA announcer in the football league – a new book charts the misadventures of Broadstairs folk singer and comedian Doug Hudson.

The 70-year-old grandad-of-two took advantage of lockdown to put pen to paper and share his adventures from around the world.

Tales cover his time from touring as part of folk group and then duo Tundra in the 70s to going solo, gigs as a stand up comedian, 30 years as the PA announcer for Gillingham FC, speaking Russian, calling barn dances and travelling to world with his guitar.

Doug said: “I have always kept notes while travelling around the world .I did a lot of stand-up comedy in the 80s and 90s and worked in the Middle East and Hong Kong. There are notes from that and from touring America and Germany as Tundra, we were quite successful and would research folk songs and write our own for our albums. When I went solo I had trips to New Zealand and Russia. I speak Russian and was asked to do calling at a barn dance. 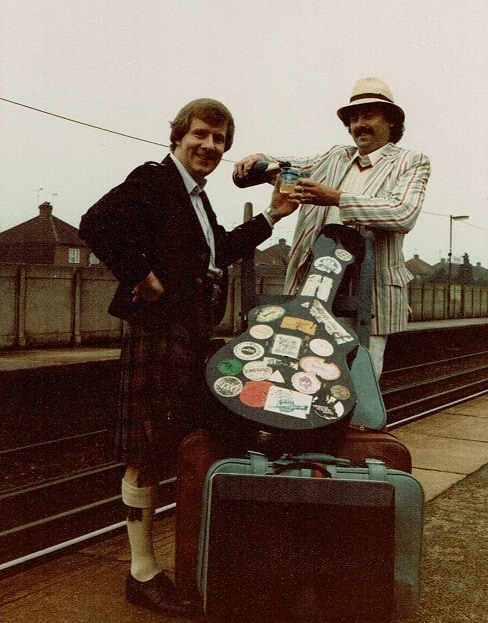 “The book tells the stories of me being abducted by Russian militia and of being on the Trans Siberian railway and getting the Russians to play cricket! When the train stopped I rushed out and set up the stumps!”

There are also anecdotes from time at the Gills with ‘mishaps on the mic,’ and tales of travel in India and riding a motorbike at a barn dance in New Zealand.

Doug, who is now part of the Hot Rats folk group, said: “It took six months to write. All our gigs were cancelled because of the lockdown and I thought rather than doing things online this was a project I could do. I started in March, going through old photos, putting things in order, and published just before Christmas.”

Doug and the rest of the Hot Rats crew hope this year they will be able to perform at the Broadstairs Folk Week but say their usual gigs in Europe are less certain for now.