An extra length of railing has been installed by a  ‘hidden drop’ under a deceptively shallow-looking water area at the slipway behind the Winter Gardens in Margate.

The area has been the site of several incidents with children, adults and dogs becoming trapped because they are unaware of the depth of the drop.

It is caused by waves scouring the sand and tidal changes, which means the depth fluctuates rather than being constant.

Last month resident Kerry September made a call for people power action after she pulled a toddler out of the tidal hole when the child fell in. This followed on the heels of an incident of a dog becoming submerged in the water and the owner getting trapped trying to rescue him.

Last year The Isle of Thanet News told how a little boy plunged under the water and had to be dragged out by his mum. Shortly after a distraught dog owner told how her rescue dog died after he went into water at the bottom of the beach slipway, but then got into trouble.

Sadly the experience proved too much for the dog and the water he had ingested resulted in kidney failure.

Although there is signage by the site, there have been calls for the hole to be filled in and/or greater safety measures to be installed.

On February 28 five residents – Kerry; Athelstan Road tenants’ association member Matt Shoul; Melanie Ball; Gemma Cole and Orla Morton Dollman – spent some two and a half hours shovelling sand into the pool to try and level off the drop. The action was organised by Matt, who made a call out for volunteers, in a bid to make the area safe.

The group cleared sand from the bottom of the concrete ramp and focused on filling in the deepest point of the puddle.

Yesterday (March 7) residents were back at the site clearing sand and filling the deepest point of the puddle again. They also celebrated Thanet council’s installation of the new length of railing. More signs are also due to be installed. 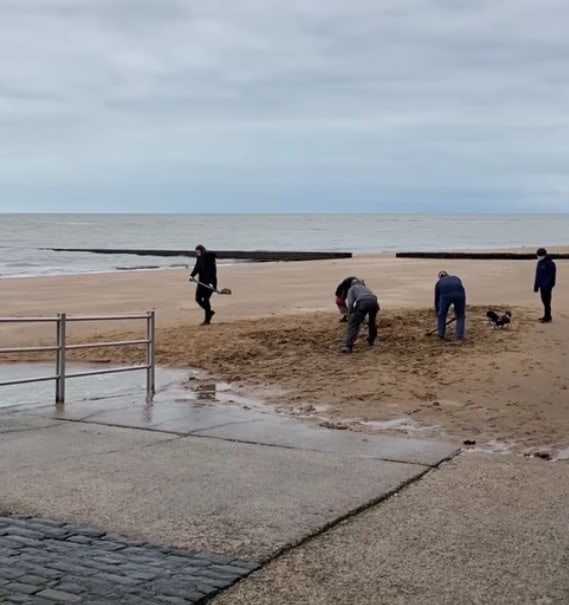 Matt said: “All tidal puddles are created and removed through tidal eddy activity, until they reach critical mass, such as this one, and their size counteracts natural tidal action from filling them in, just as quickly as scouring them out.

“By giving nature and the tide a helping hand, we hope to redress the critical mass factor of this truly massive puddle, so natural tidal behaviour will fill-in, as well as create, beach puddles.”

Kerry added: “We would like to get an orange life ring put next to fence and sign if possible. A digger to fill the hole would also keep the puddle at bay for a few years at least to prevent further deaths.”

A Thanet council spokesperson said: “Following an investigation by our coastal team, the railing has been extended to the end of the slipway to prevent people stepping off the edge into the deepest part of the pool. This work was carried out on Saturday 6 March.

“Additional signage will also be placed on the coast gate at the top of the slipway and another facing seaward to warn people walking on the foreshore. This will be done this week.

“Filling the hole with sand is likely to be futile as the eddy produced by the currents interacting with the slipway will be able to scour the uncompacted sand back out in a short time. It could also make matters worse, as deep uncompacted sand can turn to quicksand once wet, potentially trapping someone.

“Even filling the hole and compacting the sand with an excavator is likely to be short lived as the eddy produced by the currents interacting with the slipway will still exist and will scour the hole out again. This is particularly likely in March and April with large equinox tides bringing increased current speeds.”