East Kent Hospitals Trust has had to repay £2.1million after its claim of reaching 10/10 for maternity service safety measures over two years was downgraded to 6/10  by NHS regulators.

The Clinical Negligence Scheme for Trusts (CNST) was launched by NHS Resolution to secure 10 key safety areas in maternity.

A financial incentive is offered through the scheme which takes maternity pricing payments from Trusts but repays this, and a share of any unallocated funds, if they can demonstrate they have achieved all ten of the required safety actions.

But Derek Richford, the grandfather of baby Harry Richford who died at Margate’s QEQM Hospital in 2017 after a series of errors, filed a complaint over the 10/10 claim.

Last year a coroner ruled that Harry’s death had been avoidable. The inquest during January 2020 had heard of the “panic” after Harry was born by emergency Caesarean section during which his heartbeat kept dropping. Harry died seven days after his delivery from a condition caused by a lack of oxygen. An independent report said he might have survived had there not been a delay in resuscitation at his birth that caused irreversible brain damage.

Harry’s death was in the period that East Kent Hospitals reported reaching all safety measures in maternity services.

Mr Richford said claiming the vital NHS funding with a ‘false’ self assessment of maternity services was abhorrent.

Angered by his discovery Mr Richford contacted NHS Resolution and North Thanet MP Sir Roger Gale, who had previously helped the family through the inquest process.

In response chef executive Susan Acott said the assessment was correct. NHSR also wrote to the Trust to ask them to check their claim of 10/10. The Trust responded to say they were totally compliant.

But NHS Resolution audited the Trust results in year two of the scheme and found  6/10 actions  reached not 10/10. NHS Resolution then looked back at year 1 and found that this was only 6/10, falling in the lowest 6% of Trusts for this measure. The Trust were told to repay the money. 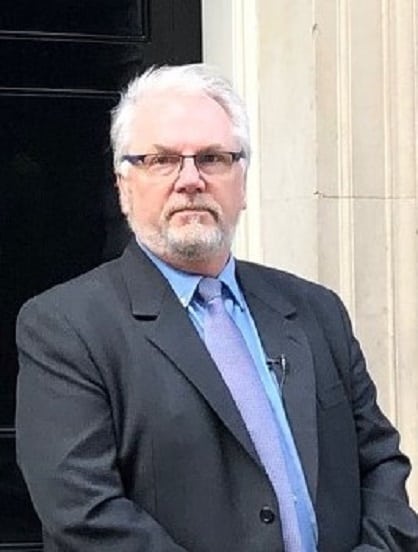 Mr Richford (pictured) said: “There is no doubt that this Trust needs more money for maternity safety, however, claiming 100% when only 60% is true is not the way to go about it.

“The real danger here is that by telling the world and indeed themselves that they are perfect in this measure, it masked what was really going on and as a result, patients were harmed.”

The troubled maternity service has been subject to a report by the Health and Safety Investigation Branch (HSIB) which found recurrent patient safety risks at the Trust maternity sites at QEQM Margate and William Harvey Hospital.

It is also subject to a review commissioned by NHS England and NHS Improvement into the maternity and neonatal services.  The investigation is being led by Dr Bill Kirkup and is expected to cover the period since 2009.

Last year the Care Quality Commission confirmed it was bringing charges against the Trust in connection with baby Harry’s death. It will be the first case of its kind against a Trust brought under powers the CQC was given in 2015.

A spokesman for East Kent Hospitals said: “We are committed to providing excellent care for every family who uses our maternity service.

“The new triage unit was included in our action plan of improvement that was submitted to NHS Resolution, and we were granted part of our contribution back to fund it.”

In Year 1, EKHUFT contributed just under £1million to CNST and received that back as well as £500,000 of redistributed money from the fund. This was returned last year.

In Year 2, the Trust contributed £866,000 to the scheme and received the same amount back. None of this money was spent and it was returned in February 2020. A £270,000 was made towards the Trust’s action plan for improvement, as allowed under the scheme.

East Kent Hospitals is among seven Trusts that have been ordered to pay back funding, a report by The Independent has revealed.

County Councillor Karen Constantine said: “Care during pregnancy and childbirth should be safe. Reaching optimum safety for women and babies depends on having the right, most up to date equipment and protocols in place and the best, most qualified and experienced staff.

“It is often counterproductive to align funding opportunities to incentives. NHS funding should be aligned to need. The health outcomes in Thanet are lower than elsewhere in Kent. The NHS is only too well aware of the cost of meeting these needs. Good health care is costly. The Government need to fund our NHS properly. Schemes such as this should not be needed to optimise a women’s safety during pregnancy or her experience of birth.

“We can see how chasing funds has created problems and has failed to deliver the improvements it’s was designed to mitigate.

“The family of baby Harry Richford and others have been very badly let down. Going forward full funding must be in place as a norm. The only way we are going to improve Maternity services and outcomes for women and babies is by solid dependable investment.”

The Royal College of Midwives is calling for all women to share their experiences at QEQM, and elsewhere

RCM CEO Gill Walton said: “We know that midwifery care during the early stages of pregnancy can really support women’s overall health and for some women it can be their first significant encounter with the NHS.

“This is often when underlying healthcare problems such as high blood pressure and diabetes are first discovered. Midwives can also support women to manage their weight during pregnancy and specialist stop smoking midwives and are so important, given the rates of smoking during pregnancy and the impact that can have on the health of both the mother and the unborn child.”

Cllr Constantine urges Thanet parents to give evidence using the quick and easy online form. The call for evidence will run for 12 weeks from today (March 8).

People who live with and care for women, healthcare professionals such as midwives and MSWS and organisations with experience of providing services for women and those with an expertise in women’s health are also encouraged to share their views.