A determined 13-year-old from Broadstairs who has beaten bone cancer and covid will take on a 25km walk in London to raise charity funds.

Dane Court student Ellis and mum Gemma Griffin, her partner, Ellis’s dad and grandad will all take on the walk which will take a route past 16 London bridges to raise cash for Clic Sargent– a charity that supports young people and families facing cancer.

Ellis was diagnosed with rare bone cancer osteosarcoma in December 2019 after discovering a lump on his knee the previous month.

Nine months of chemotherapy, operations and lots of tests and scans followed. The youngster underwent a biopsy at Stanmore hospital and started chemotherapy in the January.

In March he returned to Stanmore for an operation where 20cm of thigh bone, shin and knee joint was removed and replaced with a metal rod which bends and will ‘grow’ as Ellis does.

That op meant he would be expected to use a wheelchair, with patients generally not being able to walk for 12 weeks.

But Ellis stood the next day, was taking the stairs by day three and was riding his bike after just nine weeks!

More chemo followed that operation but Ellis was determined to beat the odds.

He said: “I was determined not to let cancer take anything else away from me, so I worked hard to get back to walking and moving around with no support. I was standing less than 24 hours after my surgery, walking on day two, walking upstairs on day three and home by day four. I didn’t want to rely on crutches or a wheelchair, I wanted to be me again.”

But then another battle ensued when Ellis tested positive for covid last July.

The teenager said: “ I had to be rushed to Great Ormond Street intensive care in an ambulance, which was scary. This, mixed with an intensive chemotherapy drug, damaged my heart and I was classed as having heart failure. “

Despite the complications Ellis finished his chemo and rang the ‘end of treatment’ bell in Regents Park in August.

He said: “I was determined to have it all over by my birthday at the end of August and I did it! My PICC line (intravenous tube)  was the last thing to go, and was taken out the day before.

“Through all of this, my Mum and I were supported by an amazing charity and we were allocated a lovely social worker called Becky. She helped me get lots of surprise gifts, which cheered me up during my horrible chemo weeks, including a pair of Converse shoes painted by an artist!

“She also helped my mum organise a Limo to pick us up after ringing the bell, which took us all the way home. My mum is on a Facebook group for parents with children with cancer, which is also run by the charity and I know this has been helpful to her.

“Last September, my mum did a skydive for them and she raised £2000…. and I desperately want to beat her!

“So in September 2021, myself, my mum, my mum’s boyfriend, my dad, my grandma and my grandad are all doing a 25km walk in London, past 16 London Bridges to raise money for the charity. We all have to raise a minimum amount each, so we are collecting it combined.

“When we travelled up to London each week for chemotherapy, we used to drive past a few of the bridges and even drove past them in the Limo on the last day, so they have become a huge part of my journey.

“I can’t wait to walk past them, knowing it is all over and knowing I can help an amazing charity support other families going through what I did.” 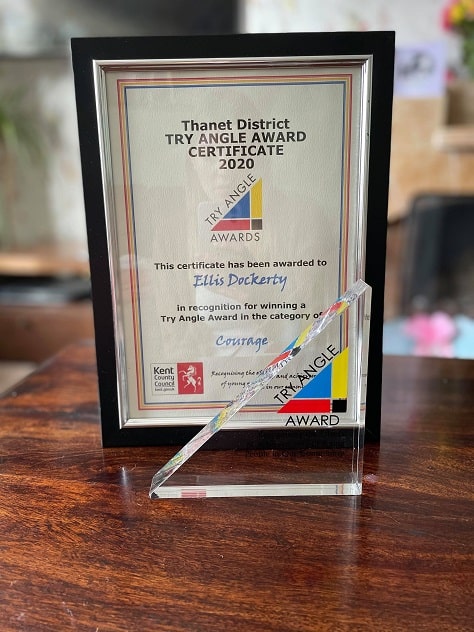 Proud mum Gemma said Ellis was also awarded a Tryangle award for his courage  and has come through it all despite nearly losing his life.

Talking to The Isle of Thanet News when Ellis was going through treatment, Gemma said: “He is brave in ways I can’t fathom. I am in awe of him. Whatever he gets thrown at him, he gets up, straightens his cap and carries on- like a boss.”

Ellis and his family will take on the ‘London bridges’ challenge in September. They have a £5,000 target.