Drawing on her experiences visiting the Tibetan mountains and inspired by watching the North Sea waves crash over Viking Bay the author has now put pen to paper with memoir, Nomad Girl.

The book documents adventures in far flung places and also offers a tantalising glimpse into the heady days of the early sixties with accounts of her time running a folk club in Montreal, Canada. 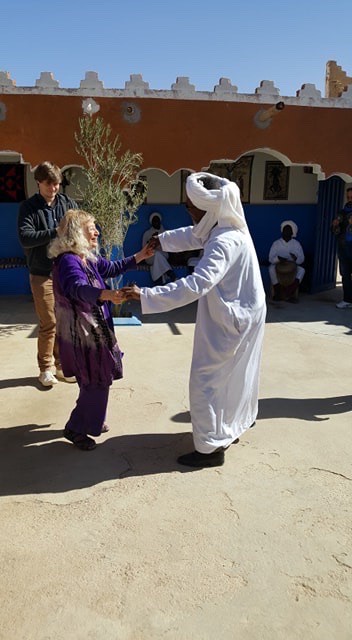 She said: “I’d always loved music and used to travel to New York City to watch gigs. I then set up a folk club with my husband and we became friends with Bob Dylan, John Lee Hooker and Leonard Cohen.”

The aspiring musicians used to stay at Niema’s house to save money on hotels, providing a wealth of fascinating memories at a time where everything seemed possible.

She said: “I always wanted to write about them but didn’t have enough material for a whole book, that’s why I waited- a memoir seemed to be the best way of documenting it.”

Before the club Niema had already been on many adventures and started travelling from a young age – her marriage is a story in itself. “I was in Israel and Shimon was in the army at the time and the only way he could get leave was if he was married  – so that’s what we did!” she said.

They set off to Africa and their daughter, Ronit, was conceived on the road – another life milestone – which is when they returned to raise their daughter and  set up the Finjan folk club.

Despite a fearless attitude towards travel, which included visiting Tibet during the brief window in the 80s when it was opened to outsiders, and witnessing a Sky Burial, Niema says times have changed. “I travelled with my daughter all over north Africa and obviously there was risk traveling as a woman back then but I wouldn’t do it now (as a young woman), things have changed. Although I still love to travel – especially to Morocco,” she said.

Niema, who also worked in professional theatre and dance, eventually moved to London to complete a PhD on the dance dramas of W B Yeats and soon found it was the perfect base to travel from. “Living in Canada everything is so far away, here you can be in another country within a few hours,”

It was then she discovered Thanet and fell in love with the coastline and people. She said: “I love living in Broadstairs. When I was living in London we used to visit at weekends and I saw the sea and fell in love. The people here are so interesting. What makes it especially wonderful to live here are my friends. I don’t have family in England. My friends are my family, kindred spirits, who have been instrumental in making this book happen, and neighbours who are not only caring but fun to be with. I am showered with love.”

Niema’s neighbour was none other than Jason Lake- son of 1950s film siren, Diana Dors. The pair struck up a friendship and Jason entrusted her to write his famous mother’s biography. But it’s now her own fascinating life experiences  and awe-inspiring memories of pivotal times in history that grace the pages of her most recent book.