It is 25 years since St Augustine’s College and Abbey School finally closed and 50 years  since it moved from Ramsgate to Westgate in the hope of expanding.

Here Andrew Sharp OBE, Secretary of the Society of Old Augustinians, takes a look at the history of the college.

St Augustine’s College was opened in 1865 by Benedictine monks who set up the first Benedictine Monastery in England since the Reformation. One of the first students to appear on the register was Peter Paul Pugin, youngest son of the famous neo Gothic architect, Augustus Welby Pugin who had lived in The Grange in Ramsgate and had built St Augustine’s church – both Grade 1 listed buildings – which eventually the school and Monastery were to inhabit.

In the early years the college flourished with a few hiccups along the way.  Many middle-class Catholic parents sent their sons to the new fee-paying school.  It of course had boarders too.  Fees from the school helped to fund other schools and projects in the local area. But all was to change when World War One broke out.

Ramsgate was a dangerous place to be during the Great War, suffering from shelling and Zeppelin raids.  As a result, the college was forced to close in 1917.  Some of the ‘better off’ families who moved from Thanet during World War One did not return afterwards. Many Old Boys lost their lives serving their country in the Great War.

The school reopened as a preparatory school in 1919, known as the Abbey School and successfully continued until the start of the Second World War.

Again, the school did well, but being so near the French coast and the threat of invasion, the school moved to Madeley Court, Hemingford Grey in Huntingdonshire, (where it was to remain until 1958).  Again, many Old Boys gave their lives in service of the nation.

In 1952 the Abbey day school reopened in Ramsgate and The Grange was an important part of this phase of the school’s history.  It wasn’t until later in the 1950s that Abbey turned from being a prep school to a secondary school ‘of the grammar type’.

In 1958 the very successful school at Madeley Court returned to amalgamate with the Abbey school in Ramsgate.  The traditional black and grey uniform was retained and so the Abbey School pupils in Ramsgate had to ditch their purple blazers for black ones.

In this post-war era the school went from strength to strength. The college expanded until in 1971 it moved into larger premises at the former Les Oiseaux Convent School in Westgate. 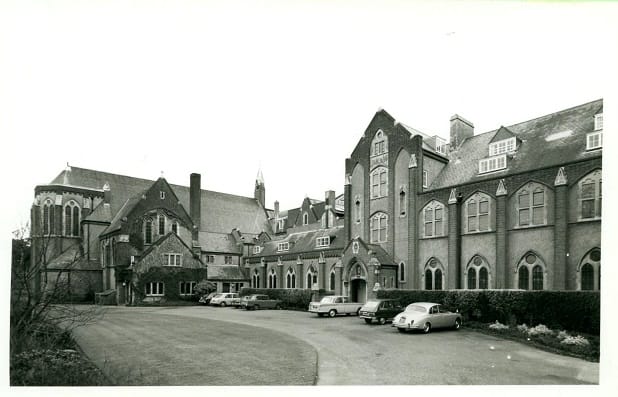 In 1960  a ‘prep’ school was set up at Assumption House, a former Convent, which was a short distance from the main school.  Assumption House was given full preparatory school status in 1963.

In 1965 when the school celebrated its centenary, it was decided to go back to using its original name, St Augustine’s College.

The college move to the former Les Oiseaux Convent School marked a new beginning.  For the first year, the college shared the premises with the senior girls from Les Oiseaux.  The experiment didn’t work too well although joint lessons with the Ursuline Convent School were to continue until St Augustine’s closed.

With the departure of the Les Oiseaux girls the junior school then moved from Ramsgate to Westgate and the College and Abbey School flourished.

The end happened quickly.  The College’s closure in 1995 came as a shock to most.  Although pupil numbers were high and the College was doing well as a place of learning, it could no longer afford to keep going. When it closed its doors for the last time, students had to find other schools for the 1995-1996 Academic Year.

In the wake of this, the Ursuline Convent School decided to go co-educational and took a significant number of boys and some staff from St Augustine’s. It was renamed the Ursuline College and still exists today.

The Ursuline College is now the only secondary school serving Catholic boys and girls from across Thanet.

For more about the history of St Augustine’s College and Abbey School, go to   www.oldaugustinians.org.uk