A Broadstairs teenager has become the youngest photographer to ever have work featured in GQ Magazine with the January/February issue including his shot of activist Patrick Hutchinson.

The images were caught by the Chatham & Clarendon sixth former are from the British GQ Men of The Year Awards hosted by Jack Whitehall in association with Hugo Boss.

Patrick Hutchinson was presented the GQ Men of The Year ‘Humanitarian Award’ after he was photographed holding a counter-protester on his shoulder to keep him safe from harm during this summer’s Black Lives Matter rallies in London.

His actions made front-page news around the world and showed a glimmer of hope in the equality campaign. 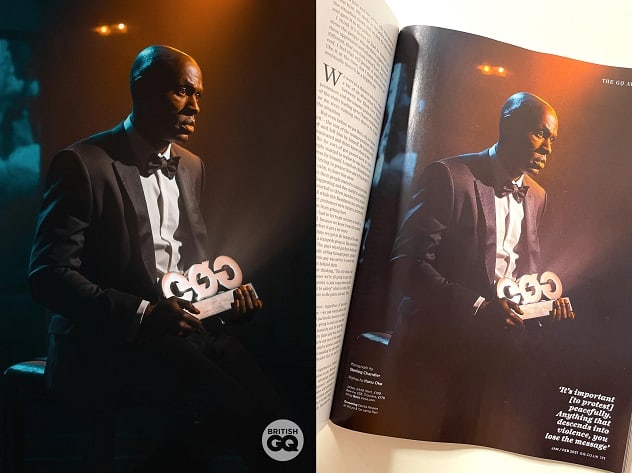 Sterling was just 16 when he took the images, which feature alongside award winning photographers such as Misan Harriman who was the first black man to shoot a cover of British Vogue and GQ Jan/Feb 2021 cover stars Lewis Hamilton, Sir Captain Tom Moore, Marcus Rashford, Shawn Mendes, John Boyega, Paul Mescal and more.

Having recently turned 17, the youngster can boast of having already worked with major artists and record labels from Ska legends The Specials to upcoming artist Che Lingo and from independent labels PIAS to one of the largest music companies Universal Music.

Sterling also has expertise in digital marketing, with clients ranging from Universal Music Group artists to global brands and has been recognised for his artistic vision. During the first lockdown Sterling ran the social media for a music initiative called Love Record Stores run by PIAS. The Love Record Stores initiative has generated over £1million in revenue for UK record shops.

Sterling is also an ambassador for People Dem Collective which champions engagement and inclusion for Black, Brown and Diaspora communities – especially in the media world.. He became involved with GQ after Margate-based director Tom Dream and People Dem Collective spotted some of his amazing work, including images of The Specials from their gig in Margate in May 2019.

Sterling said: “After the work I did for the GQ event with Patrick Hutchinson they have published my images in the Jan/Feb 2021 issue which has just been released. This makes me the youngest photographer to have my work in British GQ for the awards which is absolutely crazy. I was not expecting it at all!”

Recently Sterling was also the assistant director and behind the scenes photographer for a mini film series for Dazed Magazine and Gucci. The film, named Knotted Gold, was directed by Tom Dream and features British singer and poet Arlo Parks. It is part of Absolute Beginners, a short film series which sees nine creative talents do something they’ve never done before – get in the director’s seat.