Plans to ban the export of live animals for slaughter and fattening have been unveiled by the Environment Secretary.

The proposals – which have been welcomed by South Thanet MP, Craig Mackinlay – form part of an eight-week consultation to launch in England and Wales tomorrow (December 3), seeking views on how to better protect animal welfare during transport.

Live animals commonly have to endure excessively long journeys via Ramsgate Port, often causing needless distress and injury. Previously, EU rules prevented any changes to the trade under Single Market rules but leaving the EU enables the UK Government to pursue plans to become the first country in Europe to end the practice. 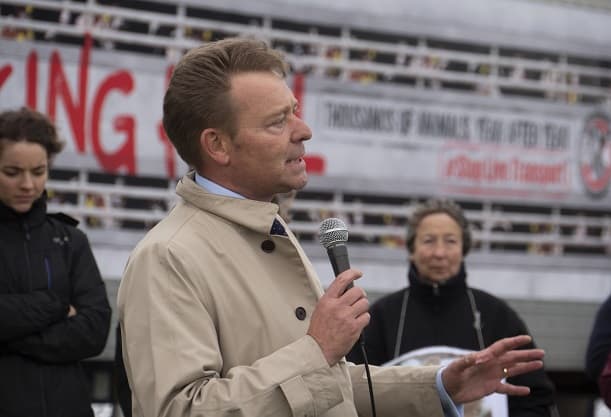 Mr Mackinlay said: “As I expected, with Brexit talks approaching some kind of conclusion, the issue of live transports via Ramsgate Port has climbed up the political ladder.

“This is a totemic issue for me and I will work with Conservative Ministers and backbenchers to put a stop to this foul and unnecessary trade until we are successful.

“We can now re-think the length of journeys for all farmed animals; I should additionally like to see local farming with local slaughter guaranteeing quality and unnecessarily long transport times.”

Environment Secretary, George Eustice added: “We are committed to improving the welfare of animals at all stages of life. Today marks a major step forward in delivering on our manifesto commitment to end live exports for slaughter.

“Now that we have left the EU, we have an opportunity to end this unnecessary practice. We want to ensure that animals are spared stress prior to slaughter.”

Around 6,400 animals were transported from the UK directly to slaughter in continental Europe in 2018, based on internal figures.

However, county councillor Karen Constantine, who represents Ramsgate and also wants an end to the trade, has asked for clarification as it is at odds with information contained in the authority’s EU Transition Preparedness report which highlights continuing trade in fish and day old chicks.

Cllr Constantine has queried whether fish and day old chicks will pass through Ramsgate. She has also asked what welfare checks will be in place, especially if delays occur.

The UK currently exports millions of chicks a year in an industry that was worth £139m in 2018.

Chris Sherwood, CEO for the RSPCA said: “We welcome plans to end live exports and look forward to seeing this happen as the RSPCA has campaigned on this issue for more than 50 years.

“There is absolutely no reasonable justification to subject an animal to an unnecessarily stressful journey abroad simply for them to be fattened for slaughter.

“Ending live exports for slaughter and further fattening would be a landmark achievement for animal welfare.”

KAALE (Kent Action Against Live Exports) said: “There is no need for yet another consultation. We had one three years ago and feel the NFU didn’t get the result they wanted so this is to pacify them.

“We need the ban from Ramsgate as soon as possible because after the amount of evidence of breaches of welfare and transport laws we have catalogued through our constant monitoring and FOI requests they have all the evidence they need.”

The consultation can be accessed here.