The wheels of democracy are running smoothly as pupils at Newington Community Primary School in Ramsgate went to the ballot box.

At a time when the drawn-out wrangling over the American presidential election continue to make global headlines, the Newington operation was seamless as boys and girls elected their new head pupil team from Year 6.

It was run as part of the recent UK Parliament Week which is a national festival aimed to encourage young people to understand how their country is governed.

Teacher Alex Ford co-ordinated the school hustings. He said: “The week began with teachers delivering an assembly introducing UK Parliament week and its purpose as well as explaining what we would be doing at Newington to celebrate.

“The candidates then wrote their own speeches on why they should be elected and what they would bring to the school if they were chosen.

“These speeches were recorded and shown to all classes on the same day – each group then held their own mini ballot where all voted.

“The results were then counted and double checked – all votes were counted – and the successful candidates were announced during a celebration assembly at the end of the week.” 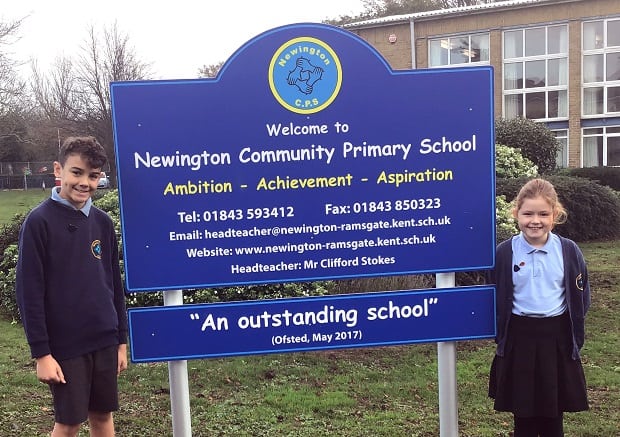 The successful candidates for head boy and girl are Noah and Brooke; their deputies are Jessica and Flynn (above).

They will carry out a variety of duties including mentoring and supporting fellow pupils, and liaising with staff as pupil voice, within the confines of the school’s Covid-secure operation.

Head Teacher Cliff Stokes believes the school’s election is very important. He said: “It is vital that we continued with our election process despite some of the restrictions that have applied to how it is run this year.

“An understanding of democracy is crucial for our boys and girls, particularly in the fast-changing world we all live in. They embraced the whole election process seriously and with enthusiasm.

“I am pleased to say that our election was seamless, well-organised and smoothly run. The calibre of the speeches was good and there was a selection of strong candidates to choose from.

“I am sure our new head pupil team will work diligently to help children and staff. We look forward to working with them and wish them success in their new roles.”