Pat Penny will turn 76 this week, and it’s a birthday she thought she’d never see after being diagnosed with lung cancer eight years ago.

Since then she has had two operations to remove part of her left lung, chemotherapy, and now receives immunotherapy treatment every three weeks at the Viking Day Centre at the Queen Elizabeth The Queen Mother Hospital in Margate.

And as well as her cancer recurring on three separate occasions, Pat has also dealt with a broken ankle, burst appendix and is now recovering from shingles.

But despite all that – and having to shield during the coronavirus pandemic – she is still smiling and wants to reassure others that a lung cancer diagnosis does not have to mean a death sentence.

Pat, who lives in Birchington, said: “Most people’s perception of lung cancer patients is someone who looks like a concentration camp victim and has a hacking cough.

“But I have never had a cough, and like many others I put weight on during the first lockdown. People are almost disbelieving of it when I tell them I have lung cancer.

“It is quite a frightening illness, and it’s a sneaky illness whose symptoms may not show for a long time.” 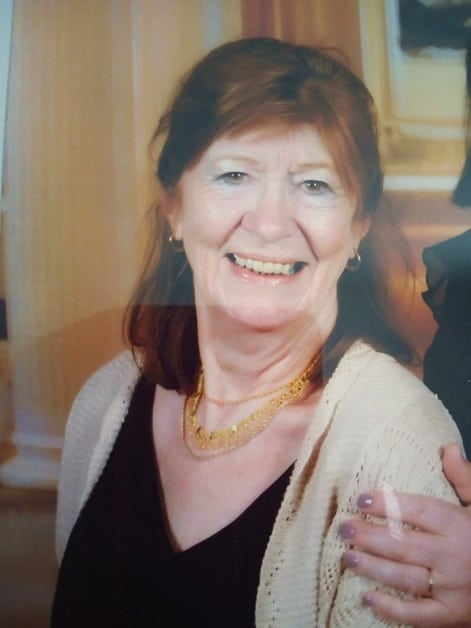 It was Pat’s sister-in-law Chris who insisted she saw her GP for a check-up, after seeing a TV advert about lung cancer. It encouraged people who had a cough for three weeks or more to seek medical advice.

Pat said: “I didn’t have a cough, but she said I was always clearing my throat. I was a smoker at the time. My GP gave me antibiotics but nothing changed so then I had a chest x-ray.

“I was a very active person, I’d renovated houses and worked for social services looking after teenagers and I thought I was very fit and healthy.”

The x-ray showed seven small dots that concerned medical staff, so Pat was sent for more tests and investigations.

Although she stopped smoking, she continued feeling fit and well and carried on enjoying life, including trips to London and nights out with friends.

So when she saw consultant Juliet King in December 2012, who reviewed all the results, her next words were a shock.

Pat said: “She said she could operate, and would I prefer the 18th or 20th? I asked which month – I didn’t realise she meant the following week. The seven little specks had grown and looked like little plants and she wanted to have a closer look and do a biopsy.

“I was just gobsmacked; totally in shock. I had no idea it was so serious or that things would happen so quickly.”

The operation took place at Guys hospital in London and Pat was told she had cancer on 23 December. After spending Christmas in hospital she returned home on New Year’s Eve and hoped for a fresh start, cancer-free, in the new year.

She said: “The care at Guys was wonderful, although my recovery was slow and dreadful.

“Eventually I got back on my feet, and as far as I was concerned that was it. I was going for regular check-ups but everything was fine.

“Then in 2014 I was watching TV and went to clear my throat and had a coughing fit.”

Tests revealed the cancer was back, in a different area of the same lung, and Pat had her second operation, removing another part of her lung.

Again, when she recovered from the surgery she thought that was the end of it, and continued living her life.

But in 2018, a routine scan showed the cancer was back – again in her left lung, meaning surgery was no longer an option.

Instead, Pat had a course of chemotherapy to try and shrink the tumour.

She said: “I was still walking about, still going to the club for a couple of vodkas, or going for meals with friends, so it was a real shock to hear it was back again.

“Chemotherapy was horrendous. I would rather have the surgery any time but I would have had no lung left so it just wasn’t an option.”

A mis-step that twisted her foot left her with a broken ankle, and then just as she was recovered from that and the chemo, she faced another setback.

Pat said: “I was ready to square my shoulders and face the world – when I collapsed with a burst appendix.

“Initially I thought it was a hangover or a stomach bug, so it wasn’t until I collapsed that I realised it was something serious.

“I’m a tough old bird but it knocked me for six.”

After recovering, Pat was told her cancer had returned yet again after another routine scan.

This time, oncologist Dr Jane Brown decided to treat her with immunotherapy, which will continue indefinitely as long as it is still working.

But hopes of returning to normal life were dealt another blow because of the coronavirus pandemic, which meant Pat had to shield and was isolated at home for three months.

And in a final twist, after developing a pain in her leg she was diagnosed with shingles.

She said: “Sometimes I look to the sky just to check whether something is going to land on me. My sister-in-law has said her final goodbyes to me several times, but I have no intention of giving in to it.

“You couldn’t make it up but here I am. I have to find the humour in it.

“I’m so grateful to my surgeon, Juliet King, and oncologist Jane Brown, my Macmillan cancer nurse Toni Fleming, and the team at the Viking Day Unit. Everyone is so wonderful, and everyone at the QEQM is so brave to keep going to work while this virus is around. They are so kind and I am grateful for everything they do.”

Lung cancer is the most common form of cancer death, and early diagnosis improves survival rates.

Macmillan nurse Toni said: “Anyone with lungs can develop lung cancer; men and women, young and old, smokers and non-smokers.

“Although Pat did not have a cough, it is one of the most common symptoms. At the moment people automatically think of Covid if they develop a cough.

“But a persistent cough that last for three weeks or more, or that changes or gets worse, must not be ignored as it could be a sign of lung cancer.”