Had you told me fifteen years ago when I met my husband on the live music scene in London, the two of us in bands at the time, that I would one day be sitting alongside him on my sofa in my pyjamas on a Sunday evening enjoying live music, I would not have believed you.

I would have struggled to envision live music without the energy of the crowd, but on Sunday that’s where we found ourselves, cozied up on the sofa with a few choice refreshments getting ready to watch the punk poet, writer and musician, Brigitte Aphrodite on our television screen. 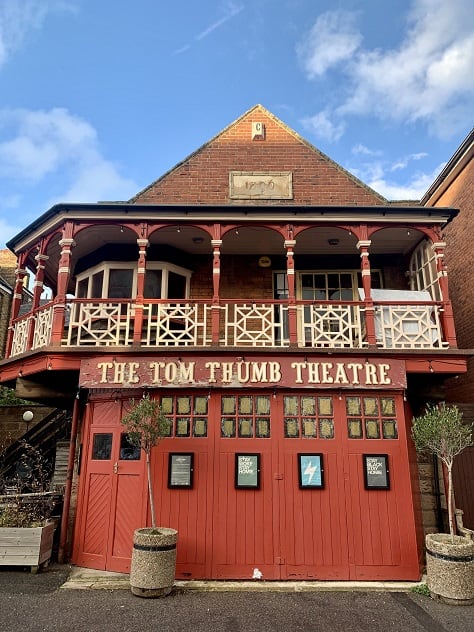 The Tom Thumb Theatre in the heart of Cliftonville, known as the ‘world’s smallest theatre’ is situated only five minutes away from our home where we were sitting on said sofa. Under normal circumstances I’d have felt a little pang of laziness at having not headed down there in person. But these are not normal circumstances, and instead I felt an excited anticipation at the imminent live performance.

On the screen, the intimate stage setting was sumptuously luminescent and adorned with plants, amongst which were nestled an amplifier and two microphones for Brigitte and her partner, the musician Quietboy who was playing with her. Making a sparkling entrance on to the screen in a sequined dress, Brigitte announced that they were going to be performing songs from her back catalogue, celebrating an era of her life which is about to move in to a new direction as she is heavily pregnant, a fact which the fabulous dress emphasised for us all to see.

For an hour we are treated to poignant and poetic prose inspired by Brigitte’s own experiences of mental health, championing virtue signalling, empathy and coming of age in Bromley where she declares there’s ‘nothing to do’ (until she discovers David Bowie hails from the same area).

The performance finishes with us all being told to shimmy on our sofa’s, during which Brigitte changes in to a new outfit consisting of a bra, black shorts and a leather jacket. The performance is electric. Kate Nash has described Brigitte’s music as ‘funny, honest and wild’ and says she is a ‘Rock n Roll glitterball’. I couldn’t have put it better myself.

The next day I contact Brigitte to ask how she found the experience, as during the performance she had said something quite revealing, noting that ‘it might be only my mum watching’. It occurred to me, that while this could be true (we knew it wasn’t as we were watching too), online streaming of live events could also make the diametrically opposite be true too. The format of playing live online opens up the possibility for people watch and engage in live performance from the other side of the planet.

Musicians from across the globe have embraced the platform; punk band Idles played live from Abbey Road, Sophie Elliss-Bextor dazzled us with live performances from her Kitchen Disco, and Snowpatrol’s Gary Lightbody wrote songs collaboratively with his followers on Instagram.

Brigitte says she sees the accessibility to a wider audience as a huge pro, telling me: ‘Its accessible for people that have to shield or might not be able to get to gigs for many reasons, so let’s not forget these people when gig culture comes back. And, you can reach people around the world!’

But there is no escaping from the fact that for performers and audiences alike, a huge part of the experience is the live connection between the two. Brigitte cites this as the only real con with live streaming, saying: ‘Theres none of that mutual energy transferal, because once you start the show you can’t see or feel who’s watching. I used my imagination and pretended that all my favourite people were watching and that I was communicating to them down the camera. I also vibe off the energy from Quietboy, and other musicians and technicians as much as possible.’

It’s true, watching a live concert from your living room doesn’t have the same immediacy, we don’t have the opportunity to interact with those performing in front of us. But perhaps we don’t need to compare and can enjoy online streamed events in their own right. I myself became immersed in the experience, and as someone who loves live music and usually spends a lot of time going to gigs and concerts, it felt energising to be in the presence of live performance again.

Brigitte tells me ‘I think coming out of this, we as artists are going to be a lot bolder and braver about putting out online content which feels quite freeing. It has empowered me to start a patreon page and not hold back anymore!’

In Margate throughout 2020, both Rosslyn Court and Tom Thumb Theatre have been live streaming events during the pandemic. Rosslyn Court has been providing free concerts from their venue featuring folk musicians, and have more planned performances on the way. Tom Thumb Theatre has three more events as part of A Month of Sundays, so if you’re missing live music and want to try watching from the comfort of your own home whilst supporting musicians and venues during these challenging times, then give them both a follow at @rosslyncourtmargate and @tomthumbtheatre to find out more.

Donations can be made at the cost of a ticket, supporting both artist and venue during a time when all revenue from live performance has been lost.

The A Month of Sundays Crew were: cameras by Josh Garner, livestream production by Shaun PRICKIMAGE, sound by Sean Goldring