A Margate food bank director says £28,000 has been stolen from the organisation’s bank account by scammers.

John Finnegan, who launched Margate Independent Food Bank with co-director Darryn De La Soul in June, says he was tricked by a caller he thought was from Starling Bank into moving the entire cash amount from the company account to his personal account.

But the cash did not deposit into his account and has now disappeared.

Mr Finnegan said: “I was called this morning at 11am. I recognised the number as Starling Bank, so I answered the mobile. She said she was from the bank and they have noticed an unusual transaction and want to check on it. She asked me to go to the app, which I did, and then she asked about a few transactions that had happened. The only one was £10,000 to PayPal.

“She said she will stop the £10,000 and put it back in the account, which she did. Then she said we need to transfer the money into my account which is also with Starling Bank, so we did.

“Then she said it will be in my account in about 45 minutes to an hour. All this time I was on hold on the landline trying to get through to the bank with no answer. It was another 45 minutes until the bank answered and then I found out I had been scammed. I still feel sick and annoyed.”

Co-director Darryn said: “All the volunteers, John and myself are devastated to have fallen victim today to a very sophisticated fraud that has resulted in our bank account being emptied of £28,000.

“After recently receiving a substantial corporate donation, plus many donations from individuals, we were, at last, looking financially secure for the next six to eight months, so that we could continue our work of helping 300 households a week in Thanet feed themselves.

“The case is in the hands of the bank and the police, so all we can do is wait to find out what they can do. We are hopeful – as often banks can reverse these things. We are terrified – in case they can’t.

“Fortunately our bank, Starling, is signed up to the Contingent Reimbursement Model of helping victims of fraud, so we hope our loss is brief – though we don’t know how long it will take to get our money back. 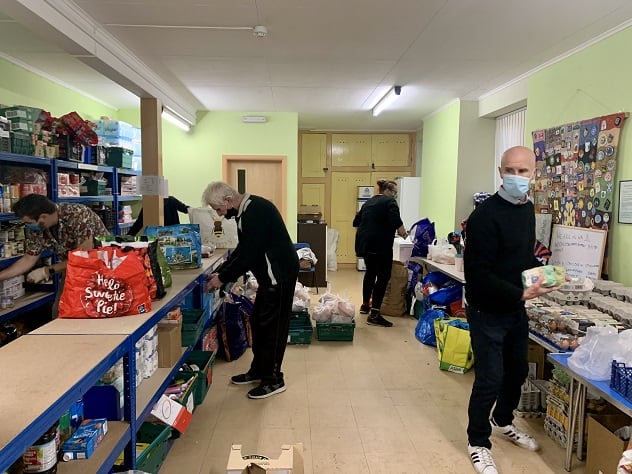 “We are all absolutely shell-shocked and utterly horrified that anyone could be so cruel as to target a bank account with “foodbank” in the name. They are literally taking the food out of people’s mouths.

“On the plus side, we received a huge donation of a whole pallet of tinned sardines from Kingfisher Foods on Tuesday (which is being shared with other foodbanks in the area), and we have enough stock to provide some semblance of food parcels next week – albeit with fewer contents and less variety than normal.

“I can’t explain the emotions running through me right now – Fury. Devastation. Horror. And a grim determination that this will not stop us from doing the work we do.”

Kent Police confirmed a report of the scam had been received.

The Margate Independent Food Bank, based at Union Church, is hoping people will help with food donations to keep them going while they wait for the investigation to conclude.

The food bank is open on Tuesdays and Thursdays from 9.30am until 1pm at the Union Methodist Church, Union Row Margate, CT9 1PP, just behind Iceland.

If you are donating money, the safest way to do it is through the Crowdfunder:

Action if you have been scammed

If you think you’ve been scammed, you should call your bank or card provider immediately.

Tell the bank what happened, and let them know the bank account number your money was sent to.

Your bank might be able to either stop the transaction from going ahead or recover your money from the fraudster’s account.

But speed is of the essence for this, so it’s important to let your bank know as soon as it happens.

Scam example: Your bank’s ‘fraud team’ give you a call

A scammer spoofs your bank’s number, so it looks like your bank is calling you.

When you answer, the scammer tells you they’re a member of the fraud team.

When you hang up and check your account, you see the codes actually allowed the scammers to drain your account.

You believed you were speaking with your bank and didn’t realise what you told them gave them access to your account.

Because of that, in this instance it’s likely the financial ombudsman will consider this to be an unauthorised transaction.