A drive to raise £10,000 to create Christmas hampers for Thanet families below the poverty line is being spearheaded by Hartsdown Academy in Margate.

The appeal came after Mr Tate spoke on LBC radio about the crushing poverty faced by many of his students and the efforts of staff to alleviate some of the problems.

This year the aim is to double those totals and to help families in Margate and the wider community.

Mr Tate said: “This is Hartsdown helping its community. As a school we want to reach out and help other people. The push will be to reach families in need, distributing hampers via local primary schools and the Salvation Army.

“We know that a lot of families in Thanet are in poverty and we are an area with one of the highest rates of poverty across the country. Many families, particularly now with Covid, are living below the poverty line and struggling day to day never mind having to find extra for Christmas food and presents.

“We want to help give that Christmas cheer to people so will be providing food hamper and presents for children.

“As a school we care about our community and those in need. We know there are children in Thanet who are homeless, so likely living in temporary accommodation and hotels. That is horrific in my view. In school we see people who are being made homeless, like all schools in Thanet. The reality on the ground is that things are getting worse and more families are now in difficulty than a year ago, nationally as well as locally.”

Thanet has the highest child poverty rates in Kent and the second highest in the south east. Research from by Loughborough University, on behalf of coalition End Child Poverty, shows some 37% of youngsters aged under 16 on the isle are living below the poverty line after housing costs – equating to 9943 children.

The ‘poverty line’ is defined as household income (adjusted to account for household size,) that  is less than 60% of the median income. 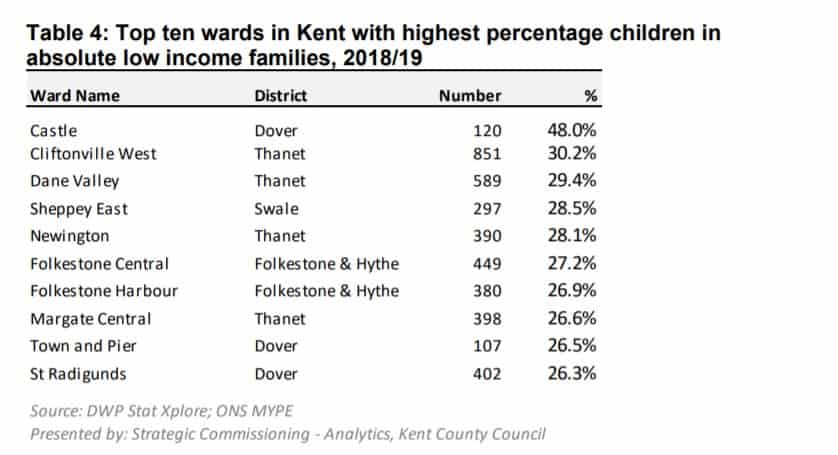 Separate data from Kent County Council shows 21.4% of Thanet children -5745- being defined as living in absolute low income households (before housing costs) – the highest level in Kent. KCC data does include some ward detail and shows almost half of the wards in Thanet (47.8%) and Dover (42.9%) are within the 20% of wards in Kent with the highest proportion of children in absolute low income families. Worst affected wards are Cliftonville West, Dane Valley, Newington and Margate Central.

Conditions have worsened this year as the effects of the pandemic, including redundancies and shorter working hours, bite.

The Tim’s Gift appeal this year aims to raise £10,000. Donations of new toys for gifts, long life, non-perishable food and money are welcome. These can be taken to Hartsdown Academy before December 11. Donations can also be made via the Justgiving page.

Hampers will be put together, and presents wrapped, by volunteers at the school after December 11 ready to be taken out and delivered to families.

Other fundraising events are being planned, such as online quizzes, to raise funds for the Christmas hampers.

Mr Tate said: “We are giving back to our community and hope to make a difference by putting a Christmas gift in as many families hands as possible.”