Campaigners against live animal exports have been told they face being fined if they turn out to protest at a shipment due in Ramsgate on Monday (November 16).

Kent Action Against Live Exports (KAALE) have been informed by Kent Police that they may issue the fines under Coronavirus legislation against anybody joining the  protest and evidence gathering at the next sailing of the ‘Joline’ out of Ramsgate.

Campaigner Yvonne Birchall, 75, would face a fine of £10,000 as an organiser. Attendees would face fines of £100-£200. The vigils at the Nethercourt roundabout by the entrance to the port tunnel are usually attended by 20 to 30 people.

Two lorries are due at 5am on Monday for the Joline shipment.

Craig Mackinlay, the MP for South Thanet which includes Ramsgate Port, is a protest attendee. 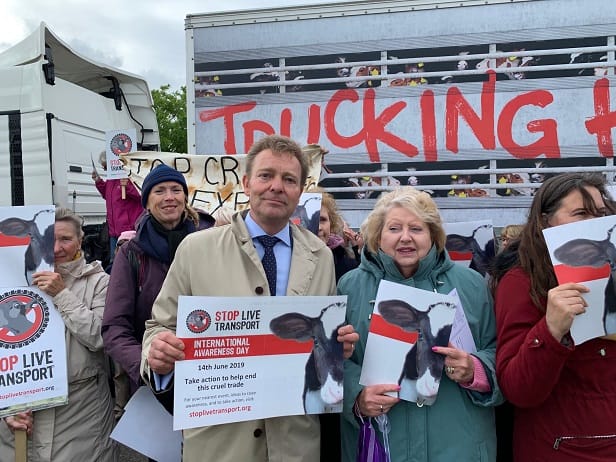 He  said: “This strict interpretation of the latest Coronavirus Regulations, which came into force on November 5, and the very concept of making such peaceful activities illegal, backed up with criminal records and fines, are one of the many reasons I voted against these draconian regulations last week.

“The regular protest would, as ever, be held outside on public highway with attendees undoubtedly more than capable of maintaining sensible social distancing.

“Whilst pure protests are banned under the rules, such regular gatherings against this foul trade have a further purpose of evidence gathering of any wrongdoing by the shippers and hauliers involved in this trade.

“I appreciate this puts Kent Police in an unenviable situation of interpreting and implementing hastily drafted rules and I sympathise with that.

“I am in contact with Kent Police and Kent’s Police and Crime Commissioner to try to resolve this nonsensical impasse but as things stand there is probably no solution and we can but hope that something closer to normality can return after December 2.

“I would ask campaigners, however reluctant they may be, to sit this one out and I can only apologise for the situation.”

Demonstrations of more than two people are banned during the national lockdown. Government has removed an exemption that previously allowed protests to take place.

Kent Police Divisional Commander for East Kent, Chief Superintendent Nigel Brookes said: “Protests are not exempt from the current Government restrictions and therefore, anyone who attends to protest risks not only their own health, but they will be liable for a £200 fine for breaching the regulations.

“Police remain in contact with organisers who understand that being involved in the holding of a large gathering in the middle of a pandemic while we remain in a national lockdown, will result in a £10,000 fine.

“Kent Police officers continue to work closely with our partner agencies and will engage, explain and encourage people to comply with coronavirus legislation. Where people refuse to listen and comply – and are putting others at risk – we will take robust enforcement action.”

However, county councillor Karen Constantine, who represents Ramsgate, has asked for clarification as it is at odds with information contained in the authority’s EU Transition Preparedness report.

This states: ““Ebbsfleet will be an HMRC Inland Border Facility. It will also be used as a Hub for prioritised freight. Should certain freight (including Scottish fish and day-old chicks) be prioritised, vehicles carrying this freight would be required to meet at Ebbsfleet where they will be issued a unique permit and directed to use the A2/M2 to junction 5, to then join the M20 and use the contraflow to the ports.”

Cllr Constantine says this appears to show that live animal exports from ports in Kent will in fact continue and has queried whether fish and day old chicks will pass through Ramsgate and whether the export of sheep will continue. She has also asked what welfare checks will be in place, especially if delays occur?

Mr Mackinlay said regulations to stop live exports are not yet in place.

He said: “There will need to be legislative change to finally stop live animal exports, but I hear a ‘time-based’ solution is looking favourite to prevent any international WTO challenge, which, at best, was oblique in any event.

“No legislation is, as yet, in the pipeline but the pronouncements from the despatch box by the Prime Minister on many occasions points to definite change on the cards. Whether this can be brought about by January 1, 2021 remains to be seen; government bandwidth is busy at present and Parliamentary time limited as there is a huge legislative agenda in process to put in place other Brexit related legislation.

“This is a totemic issue for me and I am working with other colleagues, cross party to get this foul and unnecessary trade stopped.”