On 11th November 1920, exactly 100 years ago, the Unknown Warrior was interred in Westminster Abbey in the presence of HM King George V.  Margate plays a role in this momentous event in that the Tomb of the Unknown Warrior was proposed by the Reverend David Railton, who lived in Margate around the turn of the century, at 42 Gordon Road, Cliftonville.

To mark the centenary of the interment of the Unknown Soldier, Margate Civic Society has installed a Blue Plaque at 42 Gordon Road.

During the First World War, he served as an Army Chaplain and during this time saw a grave in northern France with a pencilled inscription An Unknown Soldier of the Black Watch.  This gave him the idea of a national memorial and, in the summer of 1920, he suggested to the Dean of Westminster that an unknown soldier be brought back from the battlefields of France and Flanders to be buried among the nation’s illustrious dead in Westminster Abbey.

The Dean successfully persuaded the government to adopt the Revd Railton’s suggestion and so instructions were given to bring back a body of a British soldier who it would be impossible to identify from each of four areas: the Aisne, the Somme, Arras and Ypres.  One of those bodies was selected by Brigadier-General L J Wyatt DSO to be conveyed to England and the remaining three were reinterred.

Although reference here is made to a British soldier, it is possible the body could be that of a sailor or airman, hence he is always referred to as the Unknown Warrior rather than as the Unknown Soldier.  The Revd Railton also brought back from France the Union Jack which covered the coffin of the Unknown Warrior on its journey to Westminster Abbey. 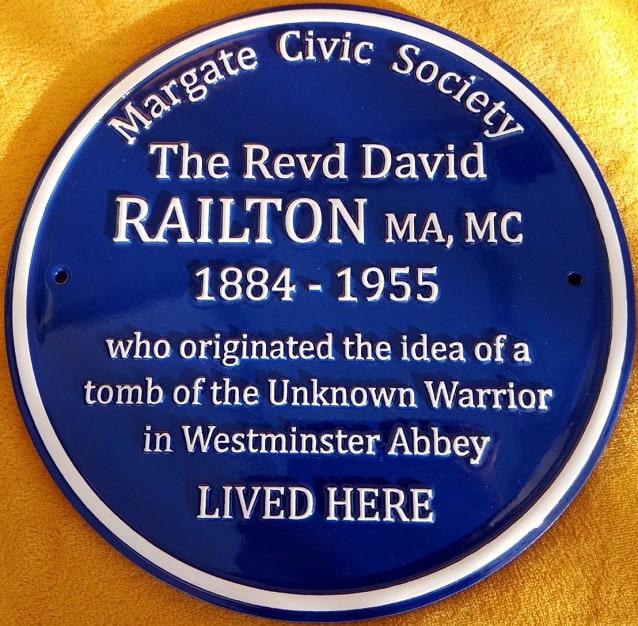 The Reverend David Railton was awarded the Military Cross and was Mentioned in Dispatches for his exemplary conduct during the war.  After the war ended, he served as Vicar of Margate from 1920 until 1925 and subsequently several Church posts throughout the country prior to his retirement in 1945.  He died at the age of 70 in 1955.

Margate Civic Society is pleased and proud to recognise the Revd Railton’s connection with Margate by installing the Blue Plaque at his former home.

Margate Civic Society had planned a grand unveiling of the Blue Plaque on November 11, but this is now not possible.  It is their intention that David Railton QC, the Revd David Railton’s grandson, will be invited to ‘officially unveil’ the plaque when such events are permitted again.

The Margate Civic Society website hosts a comprehensive list of names of those who lost their lives in conflicts including the two World Wars and who are named on the War Memorials of Margate, Birchington and Westgate-on-Sea.

Local historian James Brazier compiled this list, with details including each individual’s regiment and date and place of their death.  The list is at http://www.margatecivicsociety.org.uk/War_Memorials.html