A dinghy believed to have carried a number of Iraqi national people, including a baby, across the Channel was discovered at Joss Bay this morning (November 11).

The vessel and wet infant clothing and soiled nappies on the shoreline were found by Ramsgate resident Suzanne Martin while she was walking her dog.

The 53-year-old said: “There were wet infant clothes and soiled nappies on the shoreline, and the nappies appeared to be for a tiny child, possibly under the age of six months. 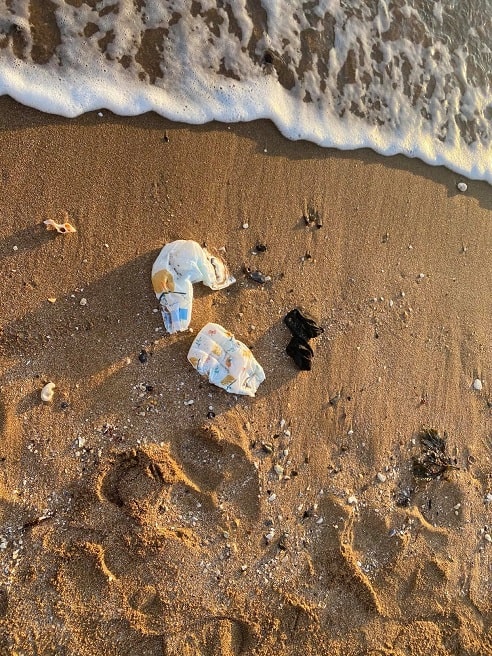 “Along with a second infant life-jacket, there were clothes and documents in French which appeared to belong to an Iraqi national. Inside the rib/dinghy, there was a discarded baby bottle, baby food and wipes as well as a second small infant life-jacket.

“The hull of the boat had been “holed” and partially deflated; there was no sign of an outboard motor, although it is possible one had been removed and dragged along the beach, track marks were leading across the bay away from the boat.

“When I arrived, I could see one the jackets floating, and it looked as if there was something black floating next to it, it was a small child’s life-jacket. A total of ten life-jackets were found, an object could also be seen floating around 100 metres offshore, this appeared to be an additional life jacket possibly connected to the boat.

“Search and Rescue at the scene said “it was the first time they had seen a boat come up” at the location, Joss Bay, and that it was “highly unusual”.

“As I approached the boat, I couldn’t make out what was floating next to the life jacket. All I could think of was the Kurdish-Iranian family who had perished in October 2020. “Rasoul Iran-Nejad, 35, Shiva Mohammad Panahi, 35, Anita, nine, and Armin, six, were found and identified their baby wasn’t.

“I also thought about the countless others who had perished making similar crossings over the summer. I could see baby clothes and nappies and I feared the worse.”

Suzanne, a journalist and writer, said police at the scene believed a group of people had been found at Broadstairs Railway Station and a second group had presented at Margate Police Station with small child.

The Maritime Coastguard Agency confirmed Margate Coastguard Rescue Team and Ramsgate RNLI ILB were tasked to assist at an incident at Joss Beach along with Kent Police and Border Force.

A Kent Police spokesperson said: “Kent Police assisted Border Force and other partner agencies after suspected migrants were reported in Margate at around 5.30am and in Broadstairs at around 6.30am.”

A number of people were located.

Dan O’Mahoney, Clandestine Channel Threat Commander said: “The criminals facilitating these crossings are breaking the law as well as risking lives and we are relentless in our pursuit of these dangerous offenders. We will do whatever we can to make this route unviable.

“We work closely with the French to stop the crossings at the source, enhancing beach patrols and surveillance, and we are a disrupting the criminal gangs responsible – in the last two weeks five people smugglers have been jailed.

“We are returning migrants who have no right to stay in the UK to safe countries with flights every week.”