Margate’s role in TS Eliot’s The Wasteland poem – reflecting on the fractured world in the aftermath of the First World War – is well-known and currently being explored through some 30 exhibitions and events in the town.

But a lesser known piece of Great War history is rooted in the actions of the former Margate Padre who is responsible for the creation of the Tomb of the Unknown Warrior.

Rev David Railton was the vicar of St John the Baptist, Margate from 1920–25, taking up the post shortly after his return from the horrors of the First World War.

The vicar had been awarded the Military Cross for his part in the rescue of an officer and two men in the conflict. Unlike many chaplains who has stayed away from the frontline, Rev Railton had gone into the battlefields, the trenches, the hospitals.

Along with the soldiers he had come under sniper fire and artillery shells, he carried stretchers with the dead and spent four sickening days collecting bodies and dog tags in the bloody aftermath of the Somme in 1916.

He spent his service trying to identify the dead, comforting traumatised soldiers and writing to the bereaved families.

He returned from the conflict with mustard gas damage to his eyes, the long-lasting effects of Post Traumatic Stress Disorder and a burning desire that the unidentified men who died on the battlefields be recognised and remembered. 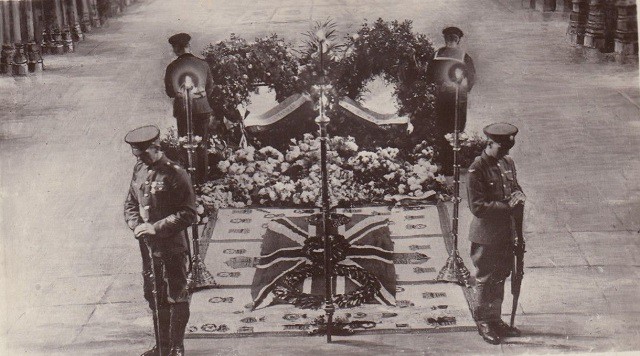 Prompted by the sight of a simple wooden cross bearing the epitaph ‘An Unknown British Soldier’ Rev Railton became consumed with the idea of a national monument.

In 1920, while serving his parishioners in Margate, Rev Railton wandered the streets of the town at night, affected by insomnia and the thoughts of those still laying in unnamed graves.

That year he wrote to the Dean of Westminster with his suggestion of burying an unknown soldier at Westminster Abbey.

He also suggested that instead of a new flag they use one at the ceremony that had seen service – his own bloodied flag that had draped the bodies of men as they were taken off the battlefields.

The idea was agreed and, in France, unnamed bodies were disinterred and one became the symbol of them all – the unnamed soldier who, in 1921, was placed in a coffin and put aboard a destroyer bound for Dover and then on to London. 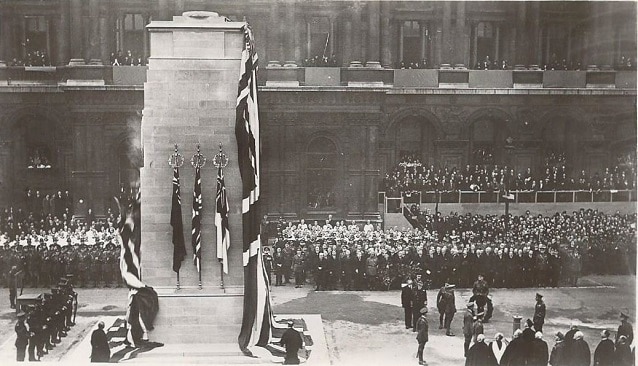 Millions lined the route of the procession as the unnamed soldier was taken to Westminster Abbey on Armistice Day of that year. The Padre’s flag was draped upon his coffin as the warrior was taken for burial at the west end of the nave,

The flag was later hung from a pillar at the Abbey where it stayed until the Queen’s Coronation in 1953. It was then moved to St George’s Chapel, by the Abbey’s Great West Door, where it remains to this day.

Rev Railton never spoke or wrote about the occasion and many did not know he was the man behind the historic and moving service to the country’s ‘ghost battalions.’ 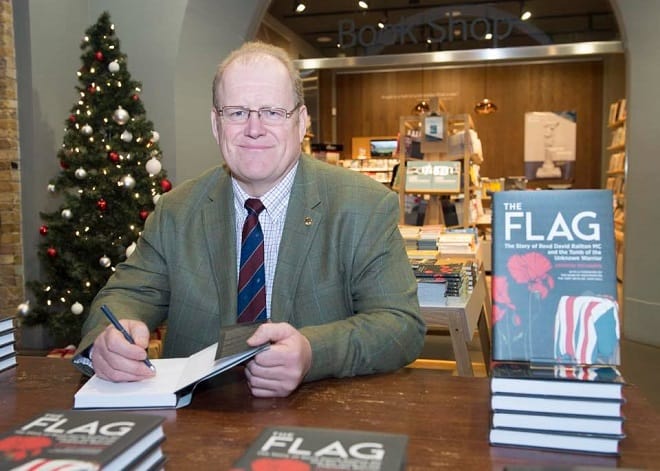 The father-of-five’s story is told in The Flag, written by Andrew Richards, who served 22 years with the Household Cavalry.

Mr Richards interviewed Rev Railton’s family, researched the history and used previously unpublished letters penned by the padre to his wife Ruby, and others, including during the three years he served in the Great War.

The Flag also details Rev Railton’s time in Margate, both as a child and then as the vicar of St John’s, and his continuing campaign to help veterans until his death, aged 70.

Detailed accounts of Margate in those post-war years were also compiled with help from Ian Dickie of Margate Museum and archives at Margate Library.

The Flag, published by Casemate UK, costs £20 and can be ordered from the website here