A family effort to raise money for Armed Forces personnel and survivors of terrorism will begin with a 22 mile bike ride tomorrow (October 29) by Melissa Jell, 12, and her cousin Grace Endicott, 11, and the girls’ mums Leanna Jell and Jade Endicott.

Melissa’s younger sister, eight-year-old Nevaeh, was also due to take part but because of a covid positive test at her school in Garlinge she has had to postpone. She will instead join her brother Samuel, and Jade’s son, Holy Trinity & St John’s pupil Alex, both 10, and their dads Steven and Daniel, on a second charity ride on November 8 (Remembrance Sunday).

And if that wasn’t enough Jade and Leanna’s brother Lee Smith is completing 15 half marathons in 15 days from November 1 to raise even more cash.

Money from the bike rides will go to the South East Fermanagh Foundation (SEFF) formed in 1998 to support the innocent victims/survivors of terrorism and ‘other Troubles related criminal violence’ and to the Soldiers, Sailors, Airmen and Families Association (SSAFA) which provides lifelong support to serving men and women and veterans from the British Armed Forces and their families or dependents.

Lee’s half marathons are raising cash for Help for Heroes.

The family say Armed Forces charities were the obvious recipients, especially in light of the support they have received from SEFF following the murder of their father Corporal Stephen Smith on July 2, 1989, by Provisional IRA terrorists in then West Germany. The murder was witnessed by his wife Tina and their children.

SEFF has supported the family and the Smith’s were amongst a SEFF delegation to travel to the EU Parliament in Brussels where they shared their painful testimony of the experiences they have lived.

Now the next generation of the family is determined to raise money so charities like SEFF, which was granted the Queen’s award for voluntary services in 2009, can continue helping those affected by terrorism. 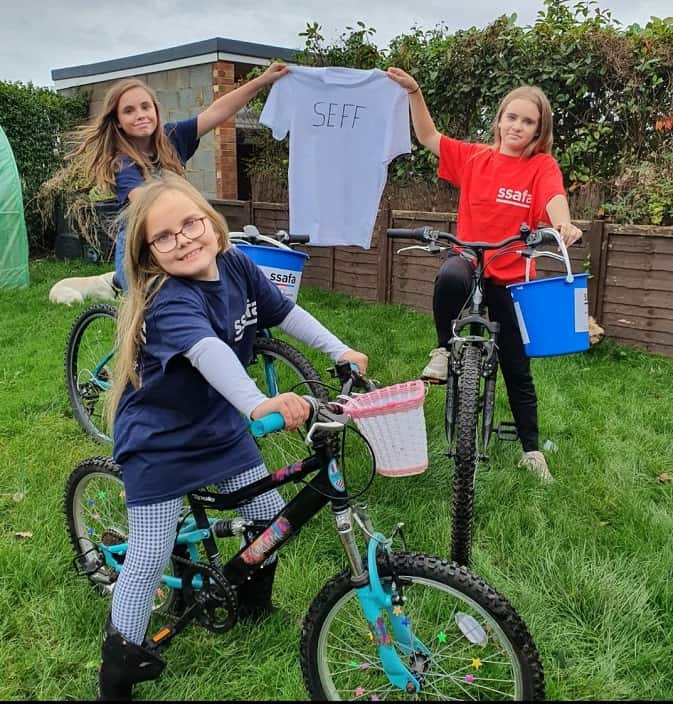 Leanna, from Westgate, said: “Nevaeh came home from school and said she wanted to do something nice and raise money. At first she said about walking but we thought that might take a really long time so came up with the bike ride and she asked Melissa and Grace would want to come.

“We have been speaking to representatives from SEFF and they have supported the girls and are going to send a rep to see us off at the start outside Westgate Library.”

Melissa and Grace, who are students at Ursuline, and their mums will be riding from the library to Reculver Towers and back.

Grace said: “We wanted to do this to support people affected by terrorism and for people in the Army. We want to raise £200.”

Leanna, 38, added: “It was really easy to pick these charities, there was no question about it.”

Jade, 34 and from Margate, added: “This is something very close to our hearts as we are also survivors off terrorism and understand how hard life can be after such tragedy! It can take years to find some normality. Simple things that we take for granted in life like just getting out of bed, just being alive and being able to hug our loved ones. We don’t want anyone to feel alone, if we can help anytime then we are willing to help.”

The bike ride crowdfunder page will remain open until November 12.