Four pre-school children from Margate are among the youngest ever fundraisers for the national Children’s Air Ambulance.

Aged between 16 months and three-and-a-half years old, the little ones took part in a sponsored walk around the perimeter of a park and raised £475 for the charity –  which operates an inter-hospital transfer service flying critically ill babies and children from one hospital to another for specialist care.

One of the youngsters taking part in the event was flown by the Children’s Air Ambulance when she was just four months old, in December 2017, suffering with severe breathing difficulties after developing bronchiolitis.

Thanks to the helicopter flight, Alba got the specialist paediatric care she needed as quickly as possible and now, according to her mum Jess “you would never know she was so poorly when she was a baby.”

Organiser of The Littlies Sponsored Walk Rachael Relton, owner of Home from Home Childminding, knew nothing about the charity or that Alba had been a Children’s Air Ambulance patient until recently.

“I think it is amazing and I wasn’t aware the charity existed until Jess mentioned it.  I am horrified that a service as vital as this isn’t government funded in any way and relies upon donations, so we decided to try and raise enough money to pay for 30 minutes’ worth of fuel for the helicopter. In the end we more than doubled our target which we are really pleased about, “she explains. 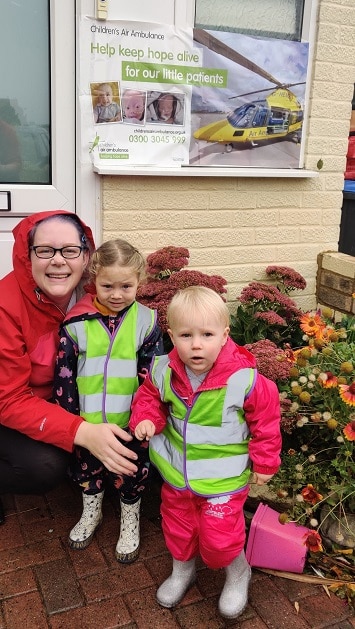 It took the children – Alba, Louie-Francis, Maisie and Arlo – an hour to walk around the park, a total of 1,800 steps each!

“Despite being a small setting, I want to be a good role model to the children, showing them how to be kind and do good deeds for others. I am building a small number of community partnerships to enhance the children’s experiences and opportunities when they are with me. At the same time, it will hopefully help someone else and raise a smile,” says Rachael.

For anyone who wants to find out more about the lifesaving charity, please call 0300 3045 999 or visit www.childrensairambulance.org.uk