Minster stonemason apprentice Jordan Cliffe will represent the UK at a European skills event next year.

The 20-year-old is just one of 14 young people on the UK team who will be vying for a top title at Euroskills Graz taking place in Austria between January 6-10.

The competitors have already been through an exhaustive year long process of regional competition, national finals and team selection to get to this point. Now they face months of intensive training to raise their standards to elite international level.

The competition in Graz, which was postponed due to the Covid crisis, is seen as an important indicator as to how the UK’s skills systems measure up against key economic competitors across Europe.

The focus is on the outstanding achievements of young, skilled professionals up to 25 years in about 45 European occupations. Some 650 active participants compete in vocational categories from the industrial, craft and service sectors. 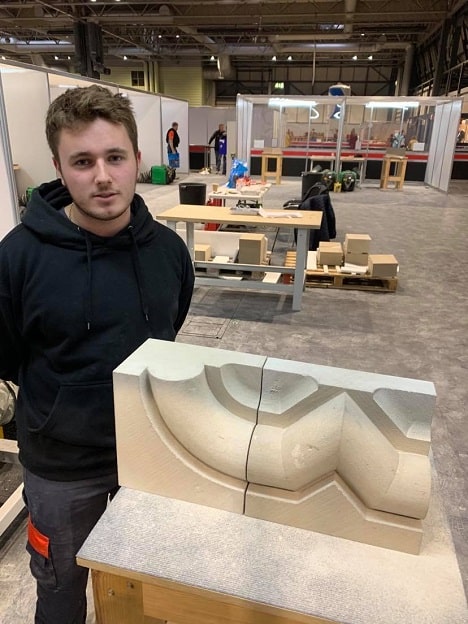 Jordan, whose dad Steve runs Cliffe Butchers in the village, said: “You do the regionals, then the nationals and from there you go into a squad of five. Then one of you is picked for the team.

“I can’t wait. It is a good achievement and I will also be eligible for the WorldSkills in 2022, which is being held in France.”

Jordan works as part of the 20-strong team carrying out the major renovation project at Canterbury Cathedral and also attends the Building Crafts College in London.

He completed his Level 3 NVQ last year and is now working towards his Level 3 advanced diploma.

The Canterbury Journey is a major five-year development of the cathedral funded by a Heritage Lottery Fund grant of £13.8 million and trusts and individuals who have given £10.9 million, including £250,000 donated by The Friends of Canterbury Cathedral.

The programme of works include restoration of the western end of the Cathedral and repairs to the West Towers, Nave roof and Christ Church Gate as well as landscaping designed to significantly improve access.

The former Sandwich Tech student said: “I am employed at Canterbury Cathedral on site and have been there for the last four years.

“The Canterbury Journey is a massive project with complete stone replacement and roof replacement at the towers and nave. It is all done with hand tools using traditional techniques.

Government and industry will be watching to benchmark how well Team UK performs compared to the country’s main European competitors. At the previous EuroSkills finals, held in 2018 in Budapest – Team UK finished ninth.