The Office and Hobbit star Martin Freeman is in Broadstairs today (September 29) shooting scenes for his Sky series Breeders.

The actor, with fellow star Alun Armstrong, was caught on camera at Viking Bay by resident Richard Goldfinch.

The filming is for a second series of the comedy, which stars Martin and actress Daisy Haggard.

While on set at Viking Bay Martin met Westgate resident Wilfred Jenkins, 24, and signed his Nativity DVD for him.

In return Wilfred, who is deaf and lives with autism, showed the star how to sign for filming. Wilfred, who does regular facebook videos with signing for different words, said: “He was brilliant and kind.”

The second series was confirmed in May this year but filming was delayed by 16 weeks due to the COVID-19 pandemic. It began on September 1 in London. The programme follows two parents who struggle with parenthood and is partially based on Freeman’s own experience as a parent. Freeman created the series and also plays the lead role. 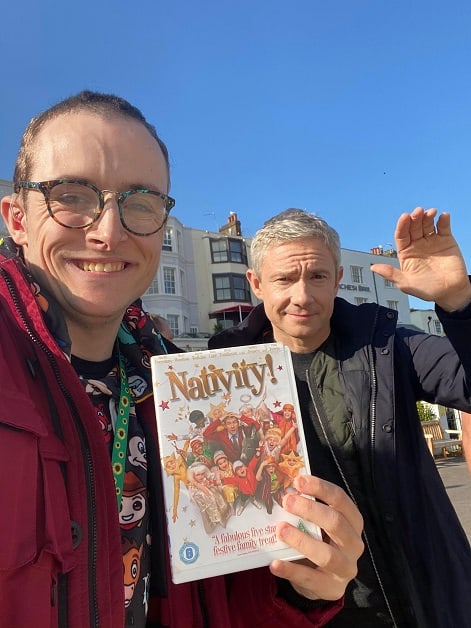 Filming means the suspension of 22 parking bays in Chandos Square on both days, and 20 bays in the Harbour Car Park. Disabled Bays are unaffected at Chandos Square.

The crew of around 35 will be social distancing to ensure they comply with all government guidelines.