A one-way system installed in Westgate this month will be entirely removed after demonstrations, a petition and representation from residents, businesses and councillors.

Kent County Councillors Emma Dawson and Liz Hurst, who represent the rural areas, met authority members today (September 29) to once again express the views of many in the town.

Kent County Council  introduced the system from the top of Roxburgh Road, into Station Road and finishing at the end of Station Road, outside the off-licence. 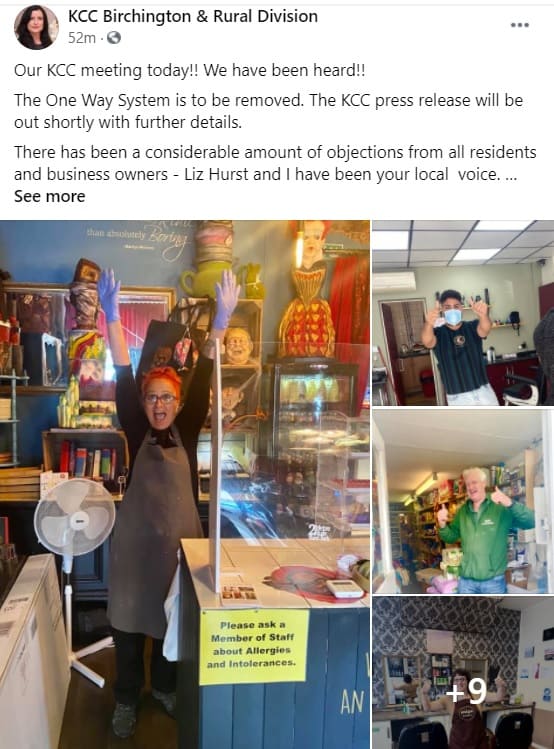 The scheme, which was due to be in place for 18 months, was one of several implemented across the county as part of the government’s push for ‘active travel’ in the wake of the coronavirus pandemic. This aims to encourage people to walk and cycle rather than use cars or public transport.

But several issues arose as buses and lorries struggled to get around the junction to St Mildred’s from Station Road and traders said the system was hitting their custom.

Today Cllr Dawson revealed KCC has now agreed a U-turn and will remove the system entirely from tomorrow (September 30).

She said: “The community spirit has been a significant part of pushing against the imposing design of the one way system. It isn’t working and it’s now been recognised as such from KCC.

“I am thankful that the community has pulled together and pushed to have their voices heard. There will be lessons learnt from this and it will set an example for any projects in the future. Community first, consultation first. We have been heard.”

A trial under the same scheme in Dover to turn the lane travelling towards the town on Maison Dieu Road into a temporary cycle and bus lane only has also been ditched following complaints.

Broadstairs also had measures installed under the same scheme. These include a pedestrian and cycle zone on Albion Street and Harbour Street between Albion Street car park and its junction with High Street. The zone will operate between the hours of 10am-10pm (except buses, taxis and for access) but means the loss of three disabled parking bays.

There is also a bus gate on Albion Street between the junctions of Alexandra Road and Harbour Street. This means that there will be no through traffic except for buses, taxis and cycles. The bus gate will be in force 24/7, seven days a week.

A Kent County Council spokesman said: “We have decided to remove the temporary Station Road scheme in Westgate on Sea and return the parking spaces and two-way road as it was previously.

“All changes introduced by the trial scheme will be removed starting on Wednesday, September 30.

“Whilst the scheme was implemented to promote social distancing and increase walking and cycling opportunities, and we still see the benefits this brings, local KCC members, the Town Council and the local MP Sir Roger Gale requested the scheme be removed.

“These trials, announced in early August, form part of the government’s desire to encourage ‘active travel’ and the need for social distancing as a result of the coronavirus pandemic.

“We appreciate that some schemes will not satisfy everyone but the government has asked all local authorities to inspire more cycling and walking.

“KCC was given eight weeks to install the changes using the money government awarded, alongside powers to use an Experimental Traffic Order.

“This means that throughout the trial period, KCC is consulting and monitoring the effectiveness of the scheme rather than doing so beforehand.

“In some cases, feedback has already enabled changes to be put in place as the schemes are used by the public.

“By implementing these schemes without delay, KCC is in the best position possible to secure the second tranche of monies that the government has said it is prepared to allocate to Kent.

“This will fund other active travel schemes with a longer lead in period to allow proper consultation.

“The DfT criteria for funding in Tranche 2 is far more strict, and will only be applicable for substantial walking and cycling schemes.

“By concept testing, in a way that has not been previously affordable, we have the chance to encourage more cycling and walking and make our roads safer for all users and this is something KCC is committed to doing.”