Veteran Thanet entertainer Gordon (Battell) Clarkson is bracing for battle after being slapped with a £100 parking fine for spending six minutes in Cliftonville’s Lido car park.

The performer says he did not even turn off his engine, let alone park, and has vowed to fight the ‘rip off’ charge.

The 57-year-old, best known as children’s entertainer Simple Simon, had taken his late wife’s cousin, Jean, and his granddaughter Rosi out for tea at the Walpole Bay Hotel and afterwards took them for a drive down to the promenade.

He said: “I drove them down to the prom by the Lido and Jean asked what the building was. I told her a little of the history and layout and then offered to show her the sun terrace, where the theatre and the Jamaica Bar had been. 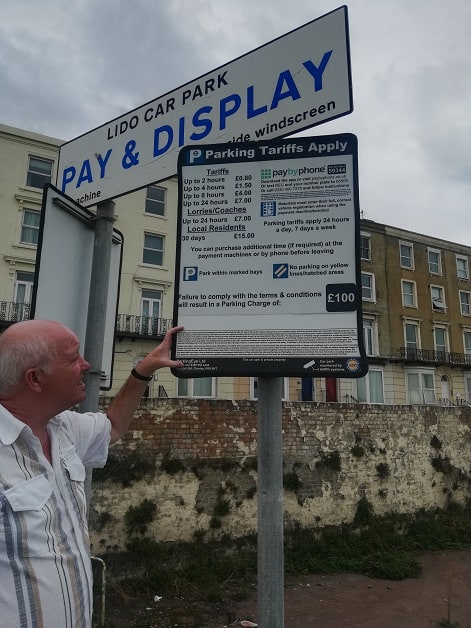 “I drove down the slope, did not park in any of the bays, but paused where the old stage door was for less than a minute, then drove slowly round the sun terrace pointing out the buildings and what they were when I worked there. I then drove out.”

Gordon, who lives in Margate, says he was gobsmacked to receive the penalty charge, which reduces to £60 if paid before September 17.

He said: “The parking charge notice included a photo of my car with an arrival time of 4.19pm and a departure time of 4.25pm.

“If I pay the £60 that is £10 per minute. I have pointed out that I didn’t park, I didn’t even stop the car, but the big thing is there is no sign to say you will be charged just for entering the site.

“I’m angry because I think they are being disingenuous and are just revenue gathering. It isn’t the money, I’m not wealthy but would pay if I was in the wrong, but I didn’t even go in a parking bay.”

Mr Clarkson has written to ParkingEye and points out: “When you park a vehicle, you drive it into a position where it can stay for a period of time and leave it there.” 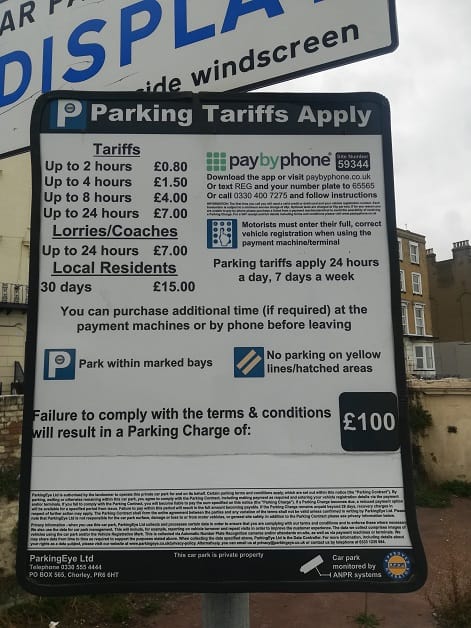 He said: “Rosi put something on facebook and lots of people responded to say they had also had problems. Even if they say I don’t have to pay I am going to campaign until there is a proper sign there saying you will be charged for driving onto the site whether you park or not.”

The ‘small print’ on one of the parking signs does state: “By parking, waiting or otherwise remaining in this car park, you agree to comply with the parking contract, including making payment as required,”

The sign does not address whether motorists driving in, finding the car park is full and then leaving, would also be liable for a charge.

ParkingEye has been contacted for a response.