A glitch in the algorithm of the government Covid test booking site means people are being directed to centres across the country instead of the one nearest to them.

Manston testing site, which has capacity for 1200 people per day, is not being offered to scores of Thanet and East Kent residents who are instead being told to travel as far away as Inverness or being told there are no available test sites.

A source told The Isle of Thanet News that the issue is the algorithm glitch combined with short staffed  labs and the impact of hundreds of people turning up and being tested but then not registering, causing laboratory processing to reach ‘pinch point.’

Sarah-Jane Marsh, Director of Testing, NHS Test and Trace, has tweeted to apologise, adding: “All of our testing sites have capacity, which is why they don’t look overcrowded, it’s our laboratory processing that is the critical pinch-point. We are doing all we can to expand quickly.”

Tests from Manston and other parts of the country are delivered to a lab in Milton Keynes but staff are swamped and there is a recruitment drive taking place to increase the number of technicians although a relatively low hourly rate is not attracting applicants. 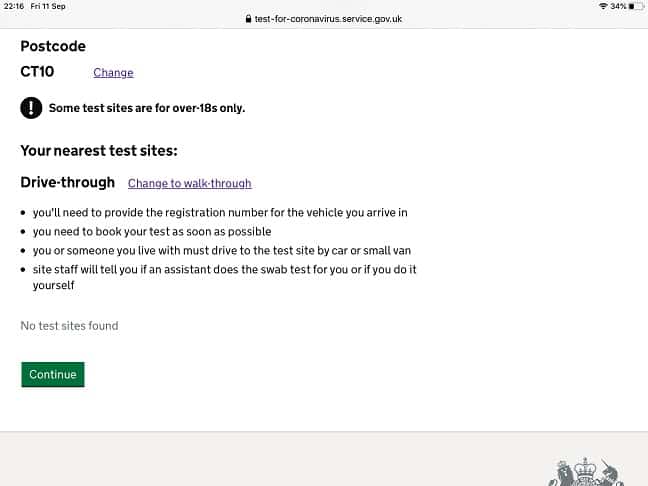 At the Manston test site hundreds of people have been turned away because they are not registered for a test.

The Isle of Thanet News has been advised that Thanet people should book a test, accept whichever centre is offered and then, once they have been sent their QR code, go to Manston. However, this will only work if a test centre is offered. Presently some people are trying to register and being told there are no test sites and no home kits available.

We were told: “As long as people have the QR code to match their test they can go to Manston. It is not how it is supposed to work but the labs are swamped. It is a worry for people. The glitch is happening in lots of places, not just Thanet.”

Mrs Marsh said: “We have additional NHS, Lighthouse, University and Partner Labs all due to open-up imminently and we are also expanding the use of non-Laboratory based tests.

“The Testing Team work on this 18 hours a day, 7 days a week. We recognise the country is depending on us.”

We have additional NHS, Lighthouse, University and Partner Labs all due to open-up imminently and we are also expanding the use of non-Laboratory based tests.The Testing Team work on this 18 hours a day, 7 days a week. We recognise the country is depending on us.

Across the UK, as of yesterday (September 11) there have been 361,677 confirmed positive Covid tests.

From September 2-7 there was a spike in positive cases, with England recording nearly 3,000 new cases on several days, the highest rate since May 19. There has not been a corresponding rise in hospitalisations or covid-attributed deaths.

In Thanet there have been 943 positive tests recorded and 164 covid attributed deaths registered up to September 5.