Work to replace the aggregates berth at Ramsgate Port is expected to start this November – with the contract being awarded to the firm that previously had its direct deal offer rejected by Thanet council.

The council says berth 4/5, currently used by Brett Aggregrates, is ending its operational life and the authority has a “legally binding agreement” to provide berth facilities for the company.

It has now been revealed that the contract for the works has been awarded to Bam Nuttall – using one of the pontoons that was formerly part of a two-for-one deal rejected by councillors last December.

The pontoons, owned by the construction firm, had been the subject of the deal and destined to provide a new berth 4/5 at the port  and to provide extra berthing for wind farm vessels at the Royal Harbour.

Councillors were asked to approve the £1.4million decision to buy the two 75 metre barges but members opted to reject the plan.

The original budget of £887,000 was set aside for the Port of Ramsgate berth 4/5 replacement and then it was proposed to move an additional £590,000 for the Ramsgate Harbour Commercial Berth in the deal with Bam Nuttall – equalling £1.4million.

The report to councillors said alternative options would prove more expensive with the estimated cost of replacing berth 4/5 with a floating berth being £723k more than the pontoon offer and a fixed berth costing  £1.7m-£2.6 million more

Councillors agreed to approve an option for renewing berth 4/5 by putting it out to tender and dropping proposals for the second pontoon at the harbour.

Thanet council’s Section 151 officer – responsible for ensuring the legality and financial prudence of decisions – had raised concerns over the ‘direct deal’ with Bam Nuttall -excluding other firms from bidding – and questioned whether it would breach procurement rules.

A tendering process was launched and the contract has been given to Bam Nuttall.

The replacement pontoon will mean a huge hike in capacity for the aggregate conveyor belt. 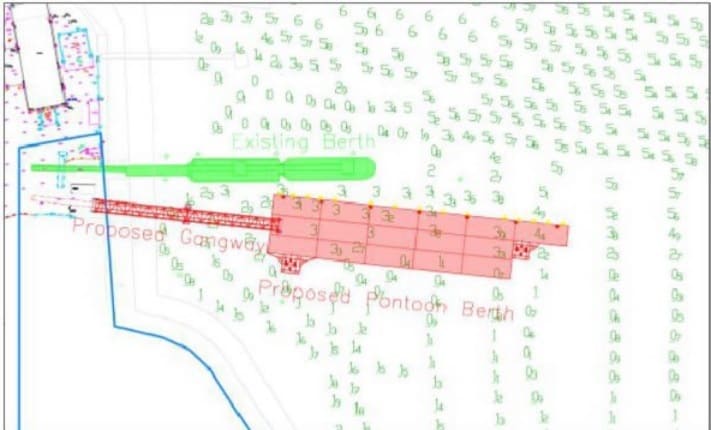 The current berth was built in 1998 and refurbished in 2006 and supports a 400 tonne per hour conveyor belt and is capable of docking 90m vessels.

A Thanet council spokesperson said: “A contract has been awarded to the contractor BAM Nuttall Ltd for the replacement of Berth 4/5.  The project will involve the reuse of one of the two pontoons that are currently moored in the Royal Harbour at Ramsgate.

“The proposal constitutes permitted development as described in Schedule 2, Part 18 Class A of the The Town and Country Planning (General Permitted Development) (England) Order 2015.  As such an application for prior approval has been submitted to Thanet District Council as the Local Planning Authority as described by the above legislation.

“The second pontoon owned by BAM Nuttall Ltd at the harbour is not connected with this project. Its continued presence in the harbour is by decision of the owner and while it is there it is accommodated by the council on a commercial basis.”

The contract start date had been set for September 14 but TDC previously raised concerns it could be delayed because the MMO wants the work screened for an environmental impact assessment.

Councillors were told delays could cost the authority up to £11k a week.

In November Green councillor Becky Wing said the business and finance plan, and engineers report, examining the berth purchase and uses should be made public. In a fiery exchange with council chief executive Madeline Homer, Cllr Wing questioned whether the reports even existed.

Cllr Wing is yet to receive copies of those reports.

The pontoons were previously in use during a tunnelling operation in London with the 3 million tonnes of materials excavated used to create an RSPB nature reserve at Wallasea Island in Essex.