A video animation and 360 degree virtual tour have been released today (August 28) for the official launch of the Royal Sands development on Ramsgate seafront.

The website now has all information relating to the official release of the first 26 luxury apartments, called Sea View and Waters Edge, at the former Pleasurama site.

The Royal Sands Ramsgate development will be built over the next three years and will consist of over 100 luxury apartments, with uninterrupted sea views.

There are one, two and three bed apartments on offer as well as penthouses. Each apartment will have underground parking.

The first phase of development should be complete by the beginning of December with the first batch of apartments ready for residents to move in by next Spring, say the team behind the construction.

Thanet-based Blueberry Homes started work on the long-awaited Royal Sands in June. The complex will be made up of 107 apartments, a 60-bed hotel and gym and leisure and retail units. There are also plans for an upmarket spa franchise at the site.

The first phase of the build, starting at the Ramsgate Tunnels end of the site, consists of the 26 apartments with the planned hotel at the Wetherspoon end of the plot being in the last phase. 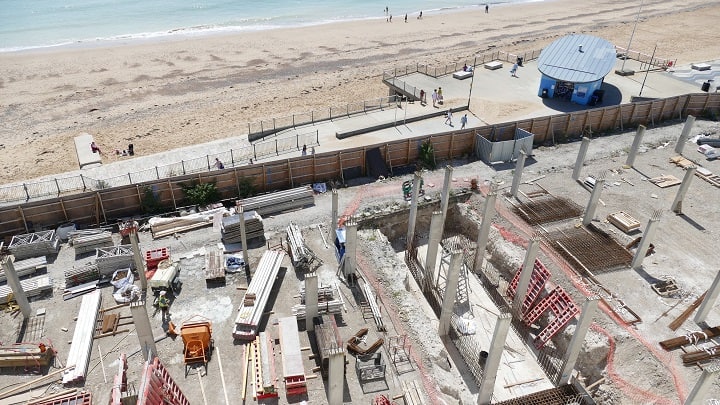 The shops will be at the front, below the transfer slab, with apartments above. Parking will be via an access road.

The plot has been empty since a fire in 1998 devastated the former funfair on the land. Thanet council made a compulsory purchase on the land in 2001 after plans for a shopping centre failed to take place.  In 2004 planning permission was granted for a 60-bed hotel, 107 residential apartments, leisure facilities and retail.

The deal was headed by development company SFP Venture UK but work never got underway and lengthy wrangles over the three 199-year leases and legal agreements followed.

Takeover talks in 2014 resulted in Cardy Ramsgate Limited purchasing 100% shares of SFP Ventures and contracts were signed in March 2015.

The firm was renamed Ramsgate Development Company Ltd and last year significant control of was taken over by Thanet businessman Martin Rigden – head of the Blueberry Homes team alongside son Scott.

The company, which has worked on developments across Thanet for some 30 years, says at the height of work some 100 tradespeople will be on site, with consecutive Blueberry builds at the Boundary Road former gasworks site and Margate’s Dane Road bringing that number to around 200. There will also be employment through the local supply chain.