The full structural shell of the first phase of development at the Pleasurama site on Ramsgate seafront should be complete by the beginning of December with the first batch of apartments ready for residents to move in by next Spring, say the team behind the construction.

Thanet-based Blueberry Homes started work on the long-awaited Royal Sands last month and say they hope to complete within a two to three year timespan, with faster sales resulting in the shorter build time.

The complex will be made up of 107 apartments, a 60-bed hotel and gym and leisure and retail units. There are also plans for an upmarket spa franchise at the site.

Speaking at the development today (July 1) the team revealed the first phase of the build, starting at the Ramsgate Tunnels end of the site, consists of 26 apartments – blocks D and E – with the planned hotel at the Wetherspoon end of the plot being in the last phase.

The plot has been empty since a fire in 1998 devastated the former funfair on the land. Thanet council made a compulsory purchase on the land in 2001 after plans for a shopping centre failed to take place.  In 2004 planning permission was granted for a 60-bed hotel, 107 residential apartments, leisure facilities and retail.

The deal was headed by development company SFP Venture UK but work never got underway and lengthy wrangles over the three 199-year leases and legal agreements followed.

Takeover talks in 2014 resulted in Cardy Ramsgate Limited purchasing 100% shares of SFP Ventures and contracts were signed in March 2015. 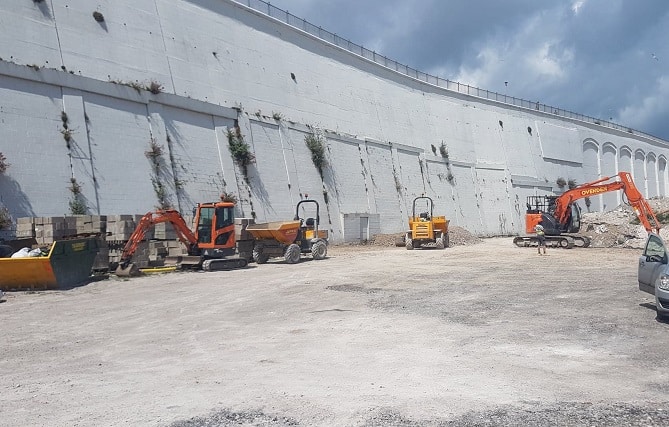 The firm was renamed Ramsgate Development Company Ltd and last year significant control of was taken over by Thanet businessman Martin Rigden – head of the Blueberry Homes team alongside son Scott.

Now the Blueberry team say there will be “quite an impact very quickly” with a fully structured building being in place by the end of November/ start of December ready for fitting out and sale before moving on to construction of blocks C through to B and then block A and the hotel. 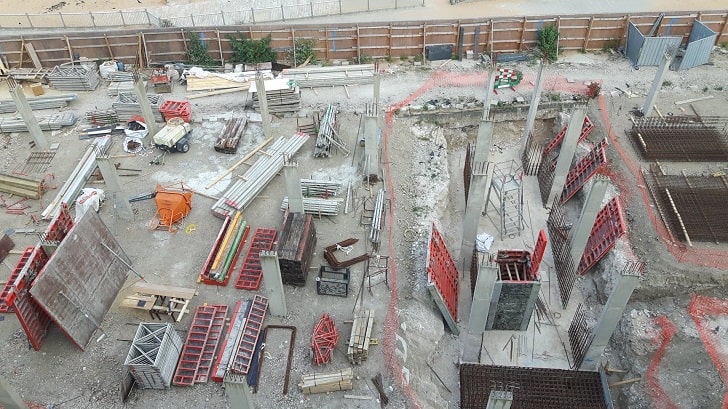 An anchor company for the hotel is yet to be secured but talks had been taking place prior to the pandemic.

A spokesman for Blueberry said: “Discussions had been quite a way down the road but stopped with Covid-19 but interest remains. It would not make sense for us not to build the whole scheme.”

There have been around 65 registers of interest in the seafront properties so far, some 80% is local but enquiries are also coming from London.

The team say the pandemic has increased a market desire for coastal property, saying: “People want to move out of the cities and get into the fresh air. It has been proven that people don’t have to work in an office so they can come here, work by the sea, go to London once or twice a week using rail links that will get them to Stratford (in under an hour).

“This means people will be spending their money here, bringing their families, and that will all go back into the local economy.”

The company, which has worked on developments across Thanet for some 30 years, says at the height of work some 100 tradespeople will be on site, with consecutive Blueberry builds at the Boundary Road former gasworks site and Margate’s Dane Road bringing that number to around 200. There will also be employment through the local supply chain.

The team say 95% of that workforce will be local, consisting of trusted sub contractors from previous projects.

Currently the transfer slab is being put in place, due for completion at the end of August, and then the steel frames will go in for the upper level of the build. These are being manufactured off-site for speed and also to reduce heavy-load traffic on the seafront.

The team have “been delighted” with many positive comments from residents since work began and say the project is driven by a passion to regenerate the seafront.

Cllr Albon said: “When we saw a Ramsgate-based company was doing the development we felt that was a real bonus. We wanted to get this site developed and do everything to help, The council is able to work with the developers to try and achieve what our area requires. We are fully supportive of getting this done.”

Cllr Everitt added: “We are finally getting rid of a big, empty space that has blighted our seafront for more than 20 years and will be getting a good-looking development.”

Apartment prices have not yet been released but Blueberry Homes say they will be “competitive and value for money.”