Glitter. Cardboard. Pom-poms. Water beads. I am constantly finding off-cuts off these on the floor, on work surfaces, and once – inexplicably – in the bath. My son has discovered arts and crafts in a big way, and it plagues me; the hoover has never seen so much action. But who am I to complain; I am trying to develop my son’s creativity, and it would be churlish of me to dissuade him if he truly enjoys it.

I never had much interest in the practical world of arts and crafts when I was a child; I wrote, which is an art, but not in the way I’m talking about here, and I preferred reading to anything else. But Bryan has discovered a passion, and an ability to absorb instructions from experts on Youtube and CBBC in a way that he struggled with during my aborted attempt to introduce online lessons to him during lockdown. He’s just good at it, and it’s something he enjoys doing by himself or with his sister over facetime – which gives me time to put the washing on and all the other jobs that seem never-ending.

I am also preparing Bryan for school in ten days time; it’s something he’s thoroughly excited by, and we’ve spent a lot of time talking about all the changes he’s going to see – how the classroom might look, his timetable, PE … it’s a lot for a nine-year-old to absorb, so he’ll have to discover some it as he goes, and I have to be empathetic to that. I’ve never been through this sort of thing before – none of us have – and primary school for me was rather a blissful experience without all this other stuff in the background.

I’ve taken some rather big changes in the background to focus my attention on Bryan’s needs; given up a job I’ve held for three and a half years being the biggest part of it. I don’t regret that decision for an instant; it’s a busy, stressful job that required someone else doing it – and they’ve got precisely that person. I had intended on being purely a full-time father – with some part-time writing thrown in for good measure – but an invitation to do a few hours a week in communications seemed rather too good to be true (I like to think I can communicate rather well). But all those things I can slot in around being a dad first and foremost, and that’s a privilege – an exhausting one where I constantly doubt myself, and my son doesn’t ever notice, but that’s just part of what a parent does.

We went to Wildwood this weekend to re-visit the wolves and bears in particular, and we came away with a new member of the family – something I had suspected would happen, as Bryan asked if he could take some money from his savings jar. I couldn’t argue, of course, and here’s what happened; 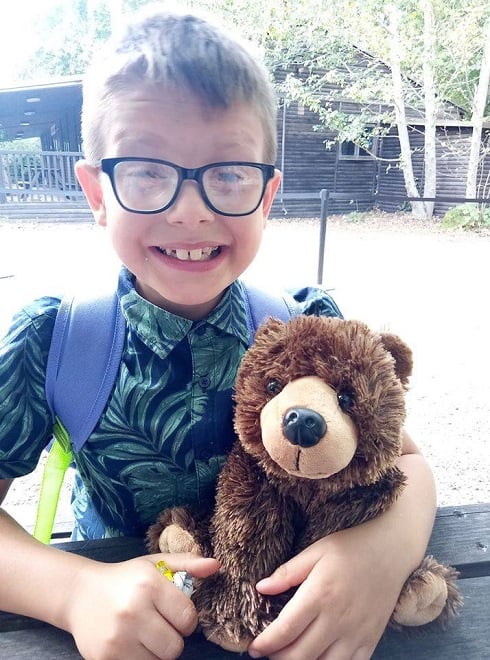 There are times when it’s fine to argue the point (his bed is already full of toys), but today was not one of those times. If he can find room and cope with their combined weight, then I’m going to stay well out of it – even when I have to pick all eight off the floor at regular intervals throughout the day.

I’ve given up a job for my son, and I don’t regret it in an instant – in fact, I’d do it again, because it’s right for him and right for our family. Interesting times ahead.