A (socially distanced) party is in full swing in Nethercourt today (August 13) as the estate’s oldest resident celebrates his 100th birthday.

Alec Tillman has been joined by family and friends  at his home on the estate after having to cancel a party at his beloved Worth Cricket Club.

Born in Worth – the youngest of three boys -the former Sandwich Council School student went on to complete an apprenticeship as an electrician.

But the economic depression of the 1930s meant work was scarce.

Alec said: “I couldn’t get a job because there was no work in the 30s. So I volunteered and went into the Navy, serving for seven-and-a-half years. I’ve been around the world a couple of times and spent a lot of time in the Arctic.”

In 1941 Alec was aboard HMS Southampton in the Mediterranean which had joined the 3rd Cruiser Squadron to take part in World War Two’s Operation Excess.

In the early afternoon of January 11, both she and fellow cruiser Gloucester came under attack from 12 Stuka dive bombers from the Luftwaffe. She was hit by at least two bombs south-east of Malta and caught fire. The resulting blaze spread from stem to stern and trapped a number of men below decks. 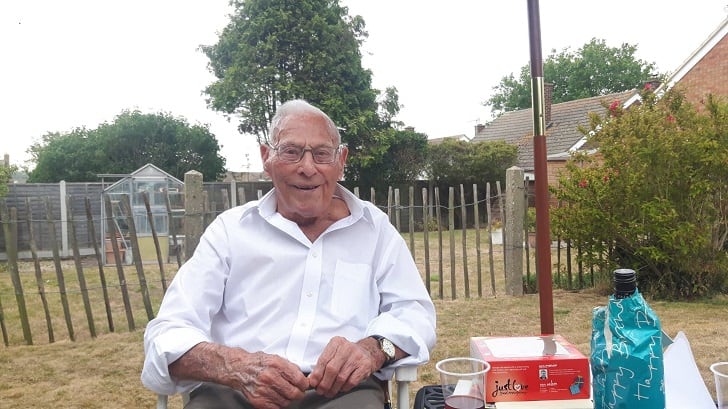 Eighty-one men were killed with the survivors being picked up by Gloucester and the destroyer Diamond.

Leading Seaman Electrical Alec was one of those picked up by the destroyer. Alec, who was also involved in the Siege of Tobruk spent a further two years serving in the Med.

Alec said: “After the war I went back to electrical work as a foreman electrician for the Ramsgate Corporation and Thanet council. I retired in 1981.”

Outside of work Alec was a talented cricketer with Worth Cricket Club, which formed in 1921.

Alec married wife Ivy in 1942. The pair met in Worth but were married in Doncaster, where Ivy’s family roots were.

Alec said: “In those days Betteshanger Colliery was just opening as a coal mine. Ivy’s family were all coal miners in Yorkshire. There was no work there so they came down here for work. When the war came along they went back to Yorkshire and that’s why we got married in Doncaster.”

Super-fit Alec and his brother-in-law also found a novel way to travel for a week’s holiday – cycling a tandem for 240 miles from Worth to Doncaster!

Alec said: “We had a week’s holiday and then rode back home again! It took us 24 hours.”

The dad-of-one, grandad-of-two and great-grandad-of-three lives at home, bakes his own bread and cheese straws and travels to Sandwich every Thursday (pre-Covid) for the Sandwich United Reformed Church coffee morning followed by lunch at Age Concern.

He said: “I also visit my friends who played cricket like me but we are all getting to ancient for that now!”

George V was on the throne