An artist who specialises in urban murals has created a mural for a Margate townhouse and is developing work for campaign group, Save Margate Lido.
Anna Carlson appealed on social media for a space to create new work and caught the attention of Anna Nerilli, owner of Magical Margate Townhouse.  She said: “I saw a post a few weeks ago about a London artist wanting to paint a mural somewhere in Margate, preferably on an outside wall.  She was proposing an M or the word Magic, which seemed rather like it was meant to be!  We had been hoping at some stage to add some art to our outside walls at some stage.”
The artist has now revealed on her website that there are plans to create a similar piece at the Lido. She said: “My exploration of sports courts led me to start painting outside. I very quickly found a feeling of exhilaration from painting in public spaces. It brought together my fascination with urban design, specifically tactical urbanism, the idea of making interventions in a space I don’t ‘govern’.

“In late 2019 I was commissioned by Rodhus Studios, a space that hosts a diverse set of artists, artisans and creators, to paint the front of their building. They wanted something that spoke of the culture and creativity behind that wall. After meeting the residents and speaking with the founder, I started to see strong parallels with the community within the Bauhaus. It was also the 100 year anniversary of the Bauhaus, so I created a design inspired by both communities.

“Currently I’m working with the Save Margate Lido group on a project to paint a prominent wall of the old Lido building, alongside local volunteers.”

Save Margate Lido was launched to try and rescue the dilapidated building which is partly listed and contains the former Clifton Baths; so far the group have raised funds to carry out a structural survey. 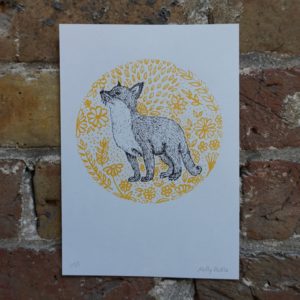 Molly is holding a wildlife exhibition. She said: “After having to postpone my exhibition due to lockdown I’m very excited to finally be able to share my new collection of work with you all in person.  This year I’ve focused on British wildlife, with 10% of profits going to the Kent Wildlife Trust.There will be something to suit everyone, from one off original framed illustrations, limited edition hand pulled prints, smaller products and gifts.
.
Saturday, 8 – Sunday,  August 16
Open 10.30-4.30pm. Daily.
Italianate Greenhouse in King Georges V1 Memorial Park