A Spitfire will fly over Margate’s QEQM Hospital on Saturday (August 1) at 11.30am and the public is being offered the chance to nominate loved ones to have their names handwritten onto the craft.

The ’THANK U NHS’ Spitfire, owned by Aircraft Restoration Company is taking flight to raise funds for NHS Charities Together.

The names will be nominated by the public as a way of recognising small acts of kindness throughout the Covid-19 pandemic. From a family member to a kind neighbour, close friend or community hero, the public can now thank them with this special gesture.

In return for their donation, their nominated name will be one of those written on the Spitfire, which has an 80,000 name capacity. As the names are added, the UK will be able to watch the extraordinary visual spectacle unfold.

The JustGiving/NHSSpitfire donations window is open. The aim is to lift the spirits of those across the UK, whilst also thanking the hospitals, communities and individuals who have been at the forefront of getting the country through the pandemic. This Spitfire was specifically built and used for photo reconnaissance during the conflict, carrying cameras instead of weapons. It was also flown and air-raced by the famous female ATA pilot Lettice Curtis.

During these routes it will fly past communities and hospitals around mainland UK.

During the 1940’s, Spitfire funds were set up by local communities around the UK and commonwealth countries to encourage a sense of purpose and hope in the struggle against adversity. This Spitfire,which was specifically built and used for photo reconnaissance during the conflict, carrying cameras instead of weapons, will now once again embody the sense of freedom and togetherness that it did then.

Flight routes are being updated throughout the duration of the donation window, which will close on Sunday, September 20 to align with the Spitfire closing the show at the IWM Duxford’s Battle of Britain Air Show. 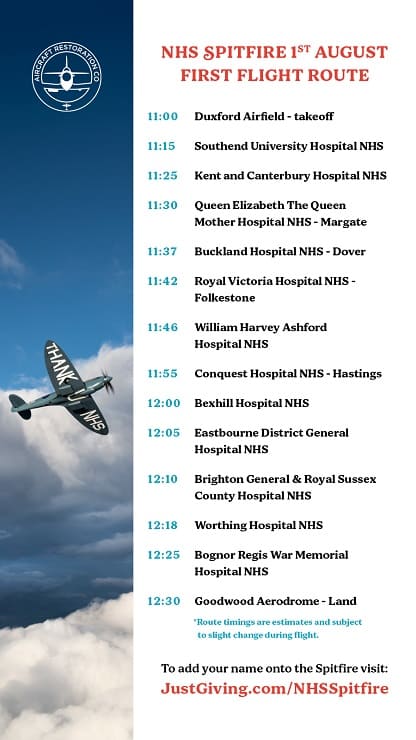 The Aircraft Restoration Company (ARCo) is a family-owned engineering business which specialises in the restoration, maintenance and operations of vintage aircraft.