Yobs have vandalised young trees planted in Margate as part of a community project.

Seven of 10 cherry trees on Dane Park’s ‘north bank’  have been snapped.

The trees were planted during a community day in January headed up by Colourful Margate and The Isle of Thanet Trees and Woods Initiative with hundreds of volunteers taking part. 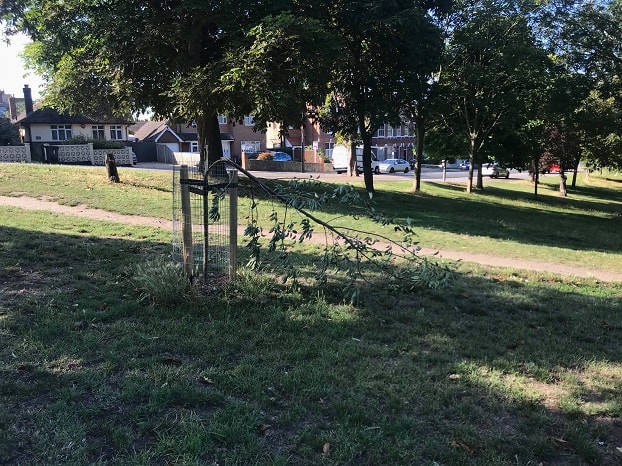 The day kicked off the scheme to plant some 1,200 trees destined for six Thanet sites  with a launch attended by BBC Gardeners World presenter Frances Tophill.

The damage was discovered this morning (July 28) and is thought to have happened overnight.

Stephanie Nson, from Colourful Margate, said she was ‘shocked,’ adding: “We are saddened that seven cherry trees have been snapped in Dane Park last night.

“These were planted by the people of Margate, including by students from a local school, on January 23 this year. Parks and trees are a vital component of our urban life. We must respect and protect them for the future. Let’s turn this negativity around by greening and planting (even) more trees in our neighbourhoods, gardens and green spaces and, most importantly, let’s plant together with our children.”

Peter Hasted, from ITTWI, said he will attempt the make the trees ‘good’ but even if they survive growth will be stunted.

He added: “I’m going to make good in hope they will resprout. they were setting their buds for next spring so they will be stunted if they do survive.

“I’m devastated for the community who worked really hard to plant them.”

Ward councillor Gary Taylor said: “Dane Valley Community is appalled by what’s happened. It’s devastating after the hundreds of volunteers that help plant the trees early in the year.. This is criminal damage to which I hope will be investigated.”

Earlier this month vandals destroyed a tree that had been planted in the park by a resident in memory of her husband.

The vandalism is the latest in a string of antisocial incidents and crime reports related to Dane Park.

Earlier this month Cllr Taylor made a call for police and the Thanet Community Safety Partnership to take action after a catalogue of incidents.

In the past two months there have been assaults, fires, vandalism and issues with Traveller encampments at the Dane Road park.

The historic site has been used by the public since opening in 1896 and has been the focus of a community tree planting effort.

It also has the grounds of Thanet Colts youth football club which recently merged with Ramsgate FC youth.

Cllr Taylor brought the issue up at a Thanet council meeting on July 9 when he asked  for action due to “increasing criminal activity and anti social behaviour notably in Dane Park and parts of Dane Valley.”