Campaigners against live animal exports have made a statement to say they are not associated with any political group after a protest in Ramsgate was joined by ‘For Britain’ demonstrators this week.

Members of Kent Against Animal Live Exports gathered at the Nethercourt roundabout, by the harbour approach tunnel, on Monday morning in a bid to monitor shipments of sheep being brought to the port for export aboard the Jolene vessel.

For Britain members also attended the protest with flyers and banners against non-stun slaughter. The group is said to have claimed responsibility for the demo despite Kaale having protested against Ramsgate shipments for many years.

Kaale chairman Ian Birchall said: “It would appear the group is climbing on the tail of KAALE. We are a non-political, non-governmental, non-aggressive group here to do the monitoring. We are happy for people to join us as long as their concern is for the welfare of the animals. If it is not, then they are not welcome.”

Mr Birchall said KAALE does not support many of the For Britain aims but no trouble was caused at the demonstration.

Some 30,000 animals were the subject of live exports through Ramsgate last year.

Campaigners say the practice is unnecessarily cruel but Mr Birchall says he hopes there is finally light at the end of the tunnel.

He said: “I honestly believe we are nearing the end of it.” 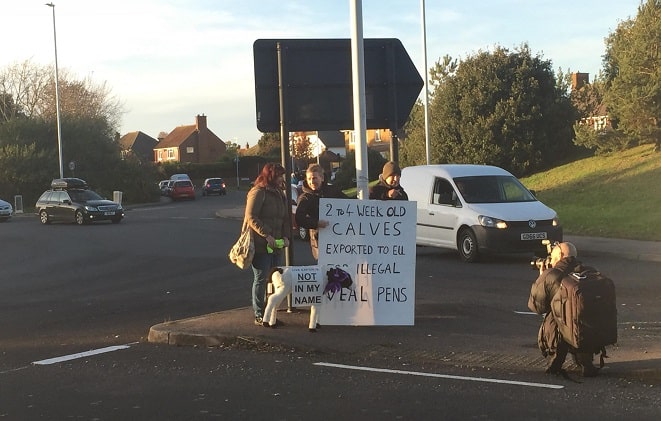 This month the RSPCA launched a petition calling on the Government to release its long-awaited report on  live exports and to bring an end to the trade.

Government has been sitting on the report into current practices and welfare impact when transporting live animals, submitted by the Farm Animal Welfare Committee, for 15 months, without revealing its recommendations.

The RSPCA is calling on its supporters to sign a petition urging the release of the report, and for the Government to act on its recommendations.

It comes as the House of Lords this week did not accept an amendment to the Agriculture Bill which would put an end to the practice of live exports.

The organisation says leaving the EU presents the best chance so far to end the trade.

Two live export shipments are due in Ramsgate this week, following one yesterday (July 27). Lorries are expected to arrive at the port at 5am tomorrow and again on Thursday at noon.

Protesters will gather at the roundabout by the entrance to the Royal Harbour Approach tunnel. Mr Birchall said people are welcome to join them.

Find the RSPCA petition at: https://www.rspca.org.uk/getinvolved/campaign/stopliveexports