Permission has been granted to create a new Aldi store in Ramsgate at the former Boundary Road gasworks site.

The store has traded from its current site opposite the gas works for the last 20 years but bosses say a move would mean increased size of the shop and provide more parking spaces.

Currently the store has 1.20 acres and wants that to increase to 1.70 acres – equating to a 1,900 sqm store. Parking spaces would go up from 70 to 118, including 6 disabled spaces, 11 parent and child and 2 active electric vehicle charging spaces. 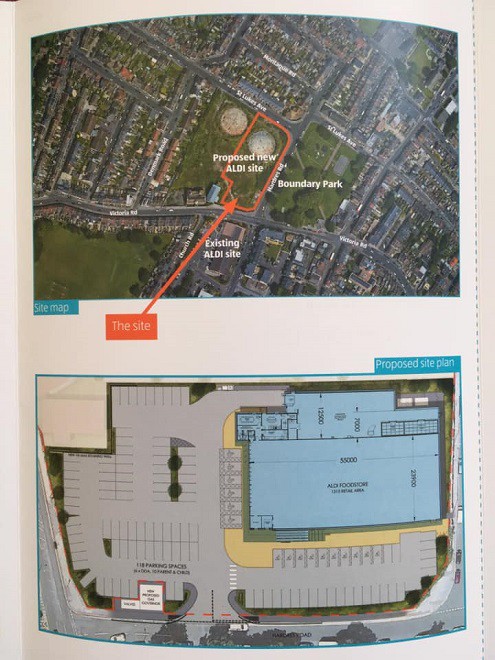 The development will be on the eastern side of the former gasworks site and excludes the listed building. It will include a new pedestrian access onto St Lukes Avenue and involves the part demolition of the curtilage listed boundary wall for vehicle access, along with the soft and hard landscaping of the proposed car park area.

Amendments have been made to the original plans to enable the majority of the Hardres Road boundary wall to be retained. Shrubs and 14 trees will be planted and log habitat piles, bat boxes and sparrow boxes will be installed.

A pedestrian island and crossing point is proposed for Boundary Road. A legal agreement with Thanet council also requires an off-site financial contribution of £22,000 towards the provision of active electric vehicle charging spaces within Ramsgate car parks, with a claw-back of the contribution if not spent within 5 years of payment,

A decision notice for approval of the scheme was published on July 10.

Planning permission has already been granted for the redevelopment of the western part of the former gasworks site for residential use, including the change of use and conversion of the listed building to residential flats.

Permission for Thanet-based Blueberry Development Estates to create 58 flats in three new build blocks and 15 in a conversion of the listed gas works office building fronting Boundary Road was given in January.

Blueberry Homes, which is also carrying out the Pleasurama site on Ramsgate seafront, will provide 30% affordable housing at a 30:70 shared ownership and affordable rent split. Financial contributions towards  schools, libraries, social care, healthcare and open space may also be required.

The three new blocks will consist of:

In 2007 and application was made to create 96 homes on the site. Some decontamination work took place but then stopped. Demolition and remediation works then took place in 2010 but work stopped until Blueberry Homes started the development this year