Chaplain for the Ramsgate and Broadstairs Sea Cadet Corps Unit Gordon Warren has died aged 75 after a short battle with cancer.

Gordon was born on May 13, 1945, in South Wales, where his pregnant mother had been evacuated during the Second World War. His father was stationed at Milford Haven on Naval convoy duty on Corvettes, starting as an Ordinary Seamen and ending the war as First Lieutenant.

When he was 17, Gordon became a Deep-Sea Scout Leader for five years until 1967, based in Beaconsfield.

Having been ordained on July 25, 1993, Gordon arrived in London’s East End in 1998 from leafy Sunbury-on-Thames with doubts at first. He had promised his family that he would compete for an appointment at the St George’s Anglican Church in Paris. He was duly short-listed but, because he had little experience of interviews, he thought he would gain some practice by answering an advertisement for St Anne’s Church in Limehouse. To his utter surprise, he was offered the job in St Anne’s and then the advice started coming in.

“I had friends knocking on the door advising me not to move to Limehouse,” he recalled. “They were worried about bringing my wife to the East End with its bad reputation, including an ex-cop who had been stationed at Limehouse and advised me not to go.”

As some had predicted, from his arrival, it was not all plain sailing as the appointed Rector of the East End’s own ‘sailors’ church’. “A man tried to stab me 10 years ago (2003),” Gordon recalled to the local press. “I was also once chased in my dressing gown down the street in the middle of the night by a minicab driver with a starting handle after I had asked him not to make so much noise when he sounded his car horn for a passenger at 3am.”

Gordon “launched” a floating church in Canary Wharf, St Peter’s in West India Quay, a converted Dutch Barge brought from the Netherlands in 2003 that attracted a Sunday evening congregation of some 90 worshippers.

He was appointed Chaplain to the Naval Regional Command Eastern England on 1 July 2007 and was proud to be a sea-going submariner chaplain. He was a Governor of Cyril Jackson School in Limehouse and also the Chaplain to the Gold & Silver Wyre Drawers Livery company in the City of London. Gordon was known to take the Remembrance Service aboard HMS Belfast, the battleship museum moored by Tower Bridge.

After Limehouse, Gordon and June headed for Ramsgate where the Sailors’ Church in the Royal Harbour officially became the permanent museum for the little ships used in the 1940 Dunkirk evacuations. He took up an appointment as the first Chaplain to the Association. 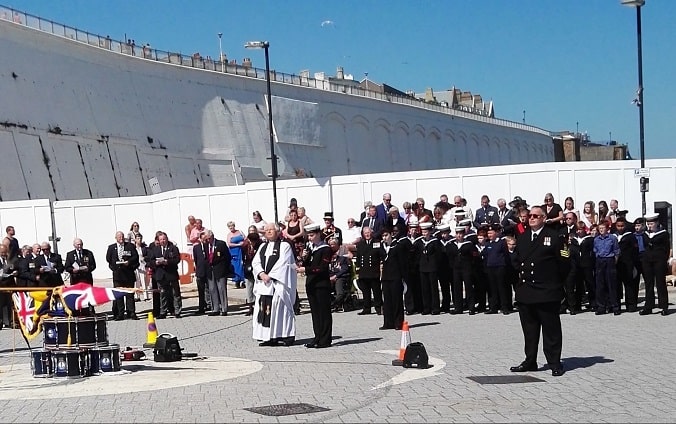 Gordon was accepted as Chaplain for the Ramsgate and Broadstairs Sea Cadet Corps Unit in April 2016 and he immediately made his pastoral and wise presence felt amongst the Adult Volunteers and the Cadets. His appointment was confirmed the following May.

When not on active Submarine Chaplaincy duty, he was to be seen at many parade nights and local community events. His counsel will be sorely missed by the Cadets, the Adult Volunteers, the Unit Management Team and the Commanding Officer.

A seafaring tradition remains strong in the Warren family with Gordon’s married daughter being a serving Royal Navy officer. His first grandchild was christened, appropriately, Noah having been born on the wettest day of the year of 2012.

Ramsgate and Broadstairs Sea Cadets commanding officer Martin Phillips said: “Gordon was a great supporter of T.S. Bulldog Cadets and Staff and continued to serve as a Honorary Navel Chaplin.”

A tribute posted by the Royal Harbour Church says: “Rev Gordon Warren passed away late Thursday evening. His wife June was with him and he had been well looked after in the Pilgrim’s Hospice over the last few weeks.

“Gordon will be missed deeply. He was someone who oozed enthusiasm in all that he did. He had a real heart to find ways to reach out to people and share the good news of Jesus with them. This was his motivation in seeking to set up the Royal Harbour Church and he had spent years building relations with people around the harbour through his prayer walks where he touched many lives.

“His death is perhaps shocking to many. Gordon seemed full of energy and vitality when the Royal Harbour Church was launched in March, but sadly the cancer advanced far more rapidly than expected.

“He was such an incredible man who will be deeply missed.  A real gift from the Lord.”

He leaves a widow, June, and a grieving family.

Information with thanks to Ramsgate and Broadstairs Sea Cadets